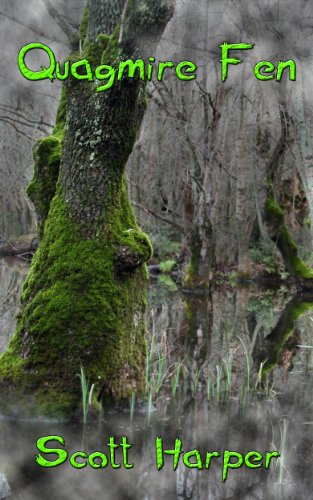 about this book: "Quagmire Fen" is a little bit of a departure from my usual work, in format as well as content. This is my ninth book, but it's my first-ever novella. It's also darker in tone than a lot of my other work.

The title of this book was a bit of a challenge, also. Titles need to relate to the book, but I didn't want one that would give anything away, either. As the primary setting is a swamp community, I also kept trying to find a fitting name for that location. I wanted something that said "swamp" without using the word "swamp". Eventually, I settled on Quagmire Fen as the name of the community where most of the story is set. Lacking a title for the project, I started to think of the project by that name, too. The name stuck and became the title of the novella, as well.

Readers meet a new type of creature in "Quagmire Fen", too—bog skulks. I don't want to give away anything by talking about their origins here—you'll have to read the book for that!—but they play a pivotal role in the plot. The look of the bog skulks came to me all at once. It seemed almost as if I had encountered one once and simply remembered how they looked when I began trying to create the appearance of the creatures. Again, though, the name proved to be a challenge. Every name I came up with either didn't strike me as right, or, as I would discover after a bit of searching, had already been used.