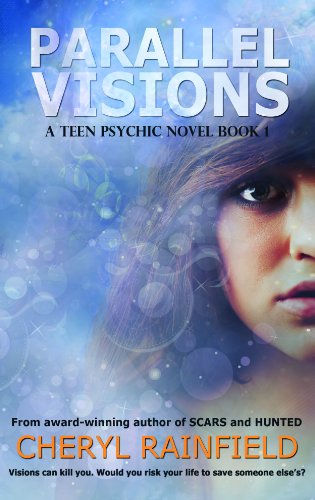 about this book: I write the books I needed as a teen and couldn't find. Books that talk about issues that others might not talk about, things that I care about deeply.

Parallel Visions deals with being different, asthma, attempted suicide, rape, and homophobia--all woven into fantasy. It's written with suspense and hope.

In Parallel Visions, Kate sees visions of the future--but only when she has an asthma attack. To save her sister from being beaten, and a suicidal classmate, Kate must trigger more visions--but that could kill her.

Like Kate, I have asthma, I know what it's like to have my life threatened, and I tried to save other abuse victims. I also used to wish that I had clairvoyance, like Kate does, so that I could know when my abusers were going to hurt me or others, and stop them. I put a lot of my heart into this book, just like I did for my award-winning books Scars and Hunted.