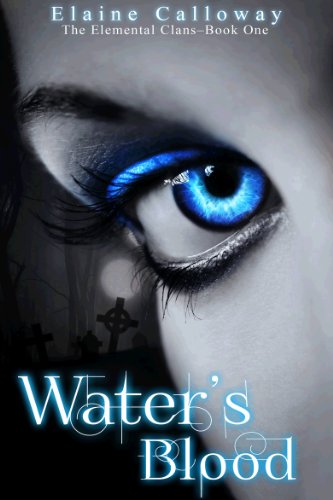 about this book: Water's Blood is the first in a four-book series about Nature's Elementals and their struggle to protect innocent souls against the Fallen Angel armies, who lurk unnoticed amongst humanity. The book is a paranormal / fantasy / romance story of the battle of good versus evil, and the importance of free will.

Brooke, a Water Elemental stationed in New Orleans, has always excelled at her job--until now. After breaking the rules to mate with a human and conceive a half-breed child, she is forbidden to share a life with her loved ones.

Now the local clan of Fallen Angels has targeted her half-breed daughter for their own, and Brooke and Alex must stop them before midnight on Halloween in order to save their daughter's soul.

I have always been fascinated by Elementals and Fallen Angels, and one day decided to put the two archetypes together in a battle for a young child's soul. Having grown up in New Orleans and its iconic yet haunting scenery, I enjoyed setting the story there and having the backdrop of the Water Elemental's story be in a city surrounded by water.

The title, Water's Blood, is in part to include the name of the Elemental protagonist (Water) but her half-breed daughter has half of her blood, so the title was a play on words. The child is the Water Elemental's flesh and blood.

I was very fortunate to find a cover artist on deviantart, and I picked out the main eye image because the expression held an attitude, a resilience, that defined my protagonist. In addition, I admire this tenacious attitude of everyone living in New Orleans, so the cover wound up having a deeper meaning.

Water's Blood contains a sneak peek of Raging Fire, which is Book Two in the series. Raging Fire will be released in Summer 2013, so stay tuned!

The story is told from multiple, or variable, third-person point of view, as the perspective shifts among the characters with each chapter. It's done well, and wasn't as disruptive, for me, as when that's done in first-person. I also appreciate that the chapters were short, and thus easy to read between doing too many things in my very busy week.

In many cultures and religions, iron is something that keeps evil at bay; in this book, the Fallen Angels/ Minare draw strength from black iron. It amused me that "sinners smell like rum and honey."

The character I had trouble connecting with and understanding was Alex. He's mentioned as a great father and cop time and again. But, when he knows his daughter is missing, he stops for a couple of beers and a nap, as figuring out what to do can wait until morning. The book even states that Ella feels like her dad had forgotten about her. Ella stayed with her best friend, but Alex didn't stop there to pick her up (or even check if she was there), just went to the bar where Brooke works. Alex does later think he can handle a search for his own kid. And he tells her he never stopped scavenging the streets trying to find her.

There was also a possible inconsistency where Cristos is punched in the face, then goes hoarse from being punched... in the gut? If the punch landed wrong, I missed it.

I was surprised how many song lyrics were used in the book. It's an especially gray area of copyright law in which few authors dare to venture.

Brad Pitt in New Orleans! I felt the setting was well-developed and expertly woven throughout the story.

Good use of the title in the story, which is something I always appreciate.

A part that made me laugh:

It took him a moment to remember his pseudonym. How did authors do it so well? Half the time he couldn't remember what name to answer to.

It's nice to see Mercury as the messenger. I wonder if in the next book, where a preview indicated a certain Elemental becomes an EMT, if anyone will remark on the caduceus frequently being used as a symbol of medicine instead of the Rod of Asclepius?

If you like the idea of powerful beings of myth guarding humans on Earth, then you would enjoy Fractions of Existence, too.

If you liked this book because there's a main character with a strong connection to the water element, who is trying to save humans from a sinister group, and is conflicted because it seems they must choose between love or the world, you would also enjoy Fractions of Existence. [by J Lenni Dorner]