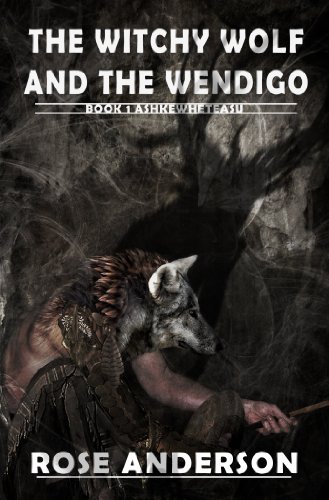 Book: The Witchy Wolf and the Wendigo (Ashkewheteasu) by Rose Anderson

about this book: The tale I'm about to describe began with this question:

What does an immortal Native American shaman do when the grave he's sworn to watch over for all eternity disappears under urban development?

Over the decades, eyewitnesses claimed they'd seen a wolf walking upright like a man, and some of these people weren't the sort you'd doubt. I wouldn't have normally given such a book a second of my time, but the locations it mentioned weren't far from my home so it piqued my interest. What's more, I soon learned these sightings weren't just modern urban legends. They went back to pre-settlement times. Historical tidbits will grab my attention every time.

There was one account in particular that captured my imagination as a writer. It occurred more than 70 years ago at a convent with ancient Native American burial mounds on the premises. I knew that Wisconsin was once filled with burial and effigy mounds so I filed that juicy tidbit away. This involved a night watchman who saw the wolfman kneeling atop a mound there. Not sitting like a wolf would. Kneeling like a man. Naturally believing his own eyes, the watchman came home rattled.

Here's the strange part – not only did he share the frightening experience with his family, he swore them to secrecy fearing he'd get fired if word got out. People would surely think he'd been drinking on the job. A little research uncovered Native American lore about wolf men guarding the graves of warriors. I saved that bit too. Before long I came upon more useful info. The pieces cascaded into place. I crafted a story with a spin that included the ancient as well as the modern legend.

Because of the fascinating true history involved in the telling, I'm sure readers will find it an interesting read.

All of my books have symbolism and metaphor between the lines. I promise if you keep them to read again, each read through will uncover more. :)

5-Star Review
• "Using traditional mythology and bringing it into the present is definitely a technique that works very well with this book. Rose disarmingly and very skillfully melds past and present into a great story layered with characters and interrelationships that we want to know more about -- I was bewitched!"

Video: The Witchy Wolf and the Wendigo (Ashkewheteasu) by Rose Anderson