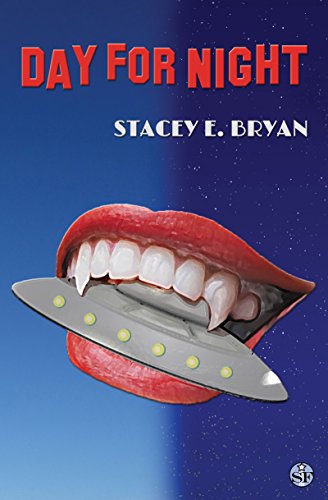 about this book: Day For Night is a light urban paranormal comedy taking place in Los Angeles. The main protagonist, Rae Miller, is a 38-40 something (she never says her real age out loud) wannabe actress who has recently been voted off her reality TV show (even though there's actually no voting on the show) and she's at a crossroads in her life where she's starting to regret many past decisions. She barely has time to marinate in self-pity, though, when the unthinkable happens: she witnesses an alien abduction in the laundry room of her apartment building, and if her life was tumbling downhill before that, it now begins to spiral completely out of control!

Writing this book was a lot of fun, because I usually deal with serious topics, so turning to comedy has been a pleasant decision. I think the audience for this book would be mainly women who enjoy reality-based stories infused with the paranormal, a smattering of romance, and some exciting action. I think the main character can appeal to a wider demographic, too, since she's somewhat older and also mixed race, two topics that are significant for anyone living in L.A. and/or trying to make a living in The Biz, as they say. The title Day for Night was taken from Truffaut's movie title in order to reference the Hollywood environment, although "day for night" comes to mean something very different for Rae when she goes to extreme measures in order to take a stand against the aliens.

One thing I learned while plotting, planning, and then writing this comedy is that even light fare can have deeper messages planted inside. I talk a little bit about racism, ageism, and even the state of consciousness in human beings. If I were able to speak to my "readers" directly, I would say if you want to laugh and immerse yourself in pop references and scathing commentary on L.A. while enjoying a crazy romp through the city (and above it!) with someone who is very flawed and extremely reluctant to take part in any of it…you will probably enjoy Day for Night. After all, we all have a little bit of Rae inside us: when faced with the incomprehensible, in all likelihood, what does the average person do? They thank God for Jack Daniels and denial!