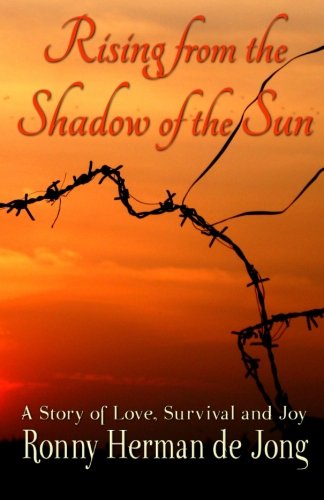 Book: Rising from the Shadow of the Sun - A Story of Love, Survival and Joy by Ronny Herman de Jong

about this book: Rising from the Shadow of the Sun, now also available as an Audiobook, stands as a memorable memoir wherein the author captures the evilness of the War in the Pacific with graphic ferocity. It illustrates how, in spite of the most harsh conditions, degrading treatment and suffering, a young mother's courage, hope and her determination to survive and protect her two young daughters in the face of hunger, edema, bed bugs, skin infections, lice, maggots, malaria and other tropical diseases still shine through.

Netty, that young mother, was MY mother. We were incarcerated by the Japanese for three and a half years in a camp for women and children on the Island of Java during World War Two. During those grueling years, my mother wrote in a secret journal letters to her parents in the Netherlands. It is an eyewitness account of the brutal treatment, harsh punishments and killings of innocent women and children by the Japanese, who wanted to exterminate the western race in order to get the monopoly in Southeast Asia. The journal, written at the risk of being tortured and killed if it had been discovered, found its way to my grandparents after the war and arrived at my doorstep in 1985. I translated it from Dutch into English and had it published in Canada; it was the first account in the English language in North America about women and children's camps in the Dutch East Indies.

My father was ordered to burn the Air Force Base in Surabaya, then flee with his squadron to the south of the island. They barely escaped on a ship in the dark of night with unknown destination. You will find his story along the same timeline as my mother's in my book.

Anyone with an interest in the History of World War Two in the Pacific, in the fate of innocent civilians, in hope against all odds and in the resilience and strength of women in the worst possible circumstances, incarcerated by the Japanese for three and a half years, will be enriched by reading Rising from the Shadow of the Sun, A Story of Hope, Survival and Joy.