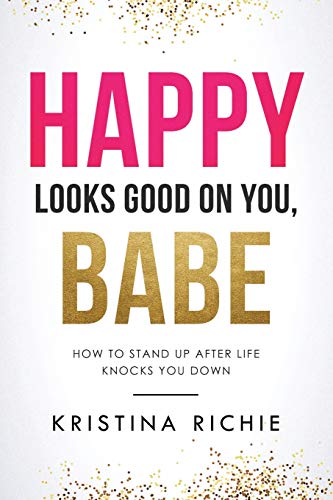 Book: Happy Looks Good on You, Babe - How to Stand Up After Life Knocks You Down by Kristina Richie

about this book: I struggled with depression my entire life. When I was about 5 years old, I found out from a neighbor child that I was adopted. I let the labels of "unwanted", "mistake", and "unloveable" define who I was from that point forward.

When I became a teenager, something unthinkable happened. My birth mother showed up at my high school, unannounced, and without any warning to my parents. My world was turned upside down in a split second, as I found out my entire life had been a lie.

I had no idea who I was or where I belonged. All I knew was I didn't want to be in the middle of the two parties fighting over my love anymore. I felt guilty for even being alive.

At the young age of 17, I decided to get married to the first boy that would have me in an attempt to escape the drama that surrounded my very existence.

I found myself a divorced, single mother by the age of 18, and went on to make several more questionable relationship decisions which ultimately lead to me becoming a 3x divorced single mom of 4 by the age of 30.

In order for me to climb out of the hole I put myself in, I had to first take ownership of my mistakes, and understand that I made the poor relationship decisions - not anyone else.

I also had to learn who I truly was - because I had let so many people tell me who I was for so long, I believed anything anyone said - good, bad or indifferent.

I've been wanting to write a book on my story to help other women for years, but never could seem to make it happen. I didn't know where I was going with it, and felt like just telling a story wasn't enough.

On January 5th of this year, I finally realized what my book's purpose would be, and I wrote and published it within three weeks.

Just this past Monday, not even 3 full weeks later, I published my second - this one being the story of how I lost 95 pounds and have kept it off for nearly 7 years.

I wrote both of these books with the goal of impacting women's lives. I want to empower, relate to, and walk with women on their journeys. I want women to know that no matter what they have been through, they can still create the life they have always wanted to live - and I am living proof.