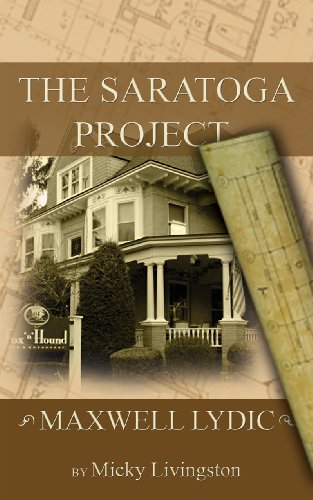 about this book: The Saratoga Project is the second book of the Maxwell Lydic Series. Maxwell Lydic is the main character in the series and in The Saratoga Project, Maxwell discovers that his biological father left him a beautiful Bed & Breakfast in upstate New York. As Maxwell and his wife Nita travel to Saratoga Springs, NY to claim their new inheritance, little do they know that what waits ahead for them is an unknown secret that Maxwell's father has kept for many years.

There really were no hard parts to write in the book. I did my research in Italy, Spain and France while on a cruise with my best friend (wife) and all the characters just fell into place.

I did learn a lot from writing The Saratoga Project. It opened my eyes to how organized crime in the early years of last century were a means for people to take care of their families and how they were able to overcome any moral traits that they once had.

I do think you will enjoy The Saratoga Project and hope you send me comments. I am finishing up the last book of the Maxwell Lydic Series, which is titled The Lanski Tower and should be available late this year.