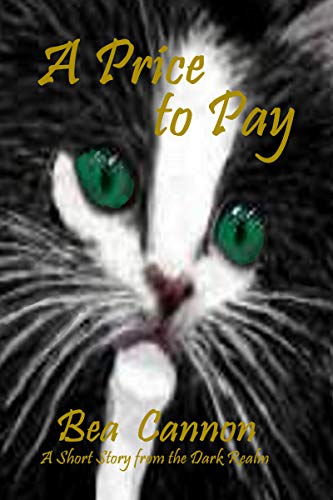 Book: A Price to Pay - A Short Story from the Dark Realm by Bea Cannon

about this book: Jack Warslow fancies himself a competent thief. However, on this night, he learns that he's not nearly as good as he thinks when his decision to go out and burglarize a big house in a nice neighborhood turns out to be a very bad one.

He picks up what he thinks is the owner's ordinary, small kitten, but quickly realizes just how mistaken he is when something happens that blows his small mind. Afterwards, he finds himself in a real pickle when things go awry during the robbery, and his only wish is to leave before the cops show up.

But, his bad luck isn't over and he wounds up somewhere he never intended to go. When he learns exactly where he is, he finds himself wishing he'd gone to church more often, listened to his mother and avoided certain friends. He fervently wishes he'd stayed at home on his couch drinking beer and watching TV instead because there's a price to pay to get home.