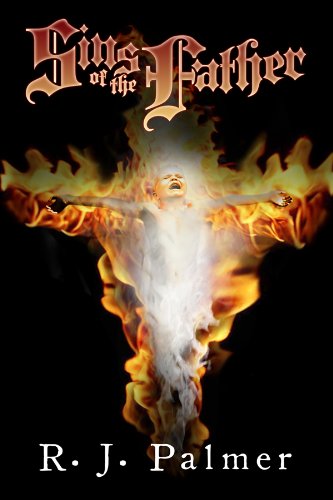 Book: Sins of the Father by RJ Palmer

about this book: This book is about an orphaned child trapped in his own little world for whom life has been extremely cruel and a minister who is looking for just one reason to recapture his flagging faith in a world that seems to be without meaning. That and this ghastly creature with no name and a taste for blood.

• What inspired you to write this book?
The idea came around long before the characters began to develop. The child, Lucian, is severely autistic and takes strongly after my own special needs stepson. The only difference is that Lucian is beyond verbal communication, where my child is not. The minister, Aaron, is closer to a reflection of my own journey but I can tell where I stepped outside of myself there because his character doesn't have the same depth. My husband was right when he said that I was talking a little about my experiences as a child though, I have to give him that one. Lucian's path had quite a lot of parallels in there.

• Who are the primary readers of your book?
Anyone who likes to have all the pudding scared out of them or enjoys a good paranormal walk through crazy land ought to really enjoy Sins of the Father.

• How long did it take to write it?
If you don't count the six months(!) I went through a horrible case of writer's block, it took me about nine months to write it.

• How did you come up with the title?
If you really want to know, it's a reference to a passage in the Bible. Google it sometime and you might find greater understanding of the premise of the book itself.

• Why did you choose this cover?
The cover, which I think absolutely rocks (thanks Athanasios), was from a graphic artist friend and colleague of mine who gave me exactly what I wanted. I described what I wanted it to look like, he handed it over and exceeded my expectations.

• What was the hardest part of writing your book?
The hardest part of writing Sins of the Father was stepping out of my fear of being ridiculed for the strongly faith based references in the book itself. I'm such a pansy and I've spent all my life being criticized in one way or another for my unusual take on my beliefs. No matter how many people take things at face value, there's always another way to look at any given written work, situation, choice, etc. and take the road less traveled. Sins of the Father was more a story about my journey through faith and acceptance, as opposed to the occult thriller it's been classified. Who would've thought, huh?

• Did you do research for your book?
I didn't need to do much research. I needed to make sure the timeline was correct and that I was putting characters in there in the right time in history. I needed to research forgotten languages and religious sects, but none of that was too rough. It was a whole lot of Google and Wikipedia since you can find just about anything and any reference to anything on one of the two.

• Did you learn anything from writing your book and what was it?
I learned a lot about life in feudal England: religious practices, indoctrinated beliefs and just the ins and outs of daily life.

• What do you want to say to your readers?
I still want to say the litany, "Buy my book!" But that just sounds like it should probably go without saying. I want for my readers to take a critical look at what they've read, after having been thoroughly entertained, that is. What I wrote meant something to me, what does it mean to you? Did you get the more subtle parts of the story? A writer almost never writes simply for their own edification. There's always something we're trying to say that gets lost amid the entertainment value of the story itself. Think about it in terms of Aesop's Fables and it will add more depth and dimension to the story itself.