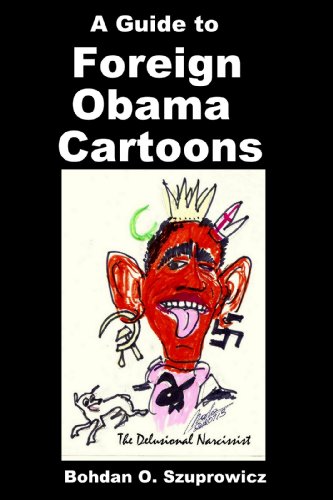 about this book: This is the first guide of its kind which helps you understand how the rest of the world sees American foreign policy, as practiced by the Obama administration. It is targeted at the general public which was denied access to such cartoons in local media or which may not have been able to understand such cartoons created in foreign languages. It is also useful as an active cybertool to politicians, commentators, journalists, writers, marketers, traders, and travelers, who want to find out how Obama and America are perceived in specific countries.

The guide consists of comments on over 200 representative foreign cartoons featuring Obama, created in at least 50 different countries. Many of such cartoons have never been seen in America and are considered politically incorrect for publication due to American media temerity, discrimination and outright censorship. Nevertheless there are many international cartoon syndicates and distribution services that can be used to locate, inspect and obtain copies of such cartoons through the Internet.

Due to copyright and ownership issues the guide does not display actual cartoon images but includes instructions how to locate them at specific web sites throughout the world, and provides the links to all the sources used in their selection and analysis.

Readers can pick a country or specific tags and locate corresponding cartoons using the links provided in each country listing. They will also enjoy many more cartoons in most cases although not all pertain to Obama and his foreign policy activities. Many foreign cartoons have also tags in English because local politicians and statesmen, as well as publishers, hope these will be picked up by publications in the English-speaking world.

They are listed alphabetically by country with cartoon tag lines for each identified in the table of contents. As political events develop around the world new cartoons are created in those and other countries which can be found by readers in the sources accessed.

Primarily the E-Guide was designed for information but it is also a fantastic entertainment tool for comedians and all those who have a sense of humor and are prepared to tolerate critical, vulgar, racist, and derogatory comment.

21st Century Research evaluates foreign sources including newspapers, magazines as well as radio and TV commentaries that accumulated political cartoons since 2008 when Obama was elected President of the United States.