about this book: THE KING'S BOOK OF NUMEROLOGY 3 – MASTER NUMBERS (aka KBN3) is the third book in The King's Book of Numerology series. It continues the exciting and revolutionary journey of numbers and their effect on our lives and destinies.

THE KING'S BOOK OF NUMEROLOGY 3 – MASTER NUMBERS takes the student deeply into the fascinating and mysterious subject of Master Numbers – compound numbers of the same cipher.

Master numbers of any type are powerful. This is because they contain multiples of the same number, i.e., the same energy. They have a major effect in numerology charts.

Most people have Master numbers in their own charts but they're hidden. KBN3 teaches you how to find your hidden master numbers.

Format is 8x10, 244 pages, paperback only. Available at Amazon.com, RichardKing.net/books and other online retail stores. Published by Richard King Publications.

Video: The King's Book of Numerology I & II 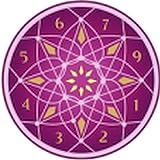