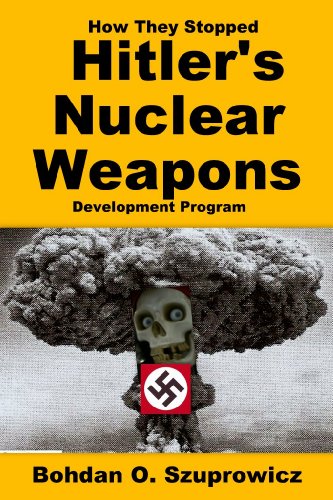 about this book: This is one of the first E-Books based on a special Nuclear Terror Geopolitics Research program conducted by the author in recent years. The overall objective is to evaluate the potential for acquisition or development of nuclear weapons by non-government organizations (NGO's) such as insurgency and terrorist groups.

The story of the E-Book itself focuses on the possible use of psychological warfare to influence Hitler in his decision to abandon the development of nuclear weapons in preference of rockets and jet aircraft as his victory weapons. This tactic could succeed because atom bomb was an untried weapon at the time and it was not practical to waste resources on an unknown and unpredictable result.

The author uses his personal experiences as a child during WW2 in Scotland to create a believable setting for the story. Although the story is based on many facts most characters and their actions are wholly fictitious.

Today the nuclear weapon is known to be the most powerful weapon developed since the discovery of gunpowder. The author plans several fiction and non-fiction E-Books dealing with the current threat to the security of specific countries as a result of nuclear weapons proliferation and for blackmail of more powerful countries.

The subject of nuclear weapons is very complex and they present the greatest security threat to the world in the future. There are numerous countries where nuclear weapons usable materials exist often without proper security. These may be stolen or otherwise obtained in the black markets by terrorists or insurgency movements of ethnic minorities that are working to obtain autonomy or independence from oppressive governments.

The author is already writing a novel "Nuclear Republic of Chiapas" focusing on nuclear blackmail by Mexican Mayan minority to gain independence. There are in fact about 40 different areas in the world where oppressed minorities may eventually acquire nuclear weapons to demand independence. The author plans to write several novels about different areas like Kurdistan, the Basque country or even Tibet with common nuclear detective characters and politicians involved in international nuclear intrigues, corruption and black markets.

Nuclear weapons, large or small and associated aftereffects of radioactivity and electromagnetic pulse, are clearly seen as the ultimate weapon and will certainly be put to use sooner or later. The series of E-Books planned by the author is designed to alert the readers and the world to a threat that is often ignored or obscured by most governments.