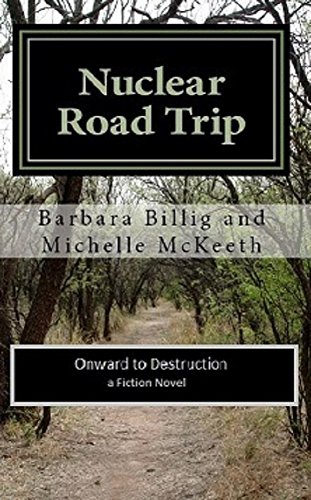 about this book: Barbara Billig's next novel "Nuclear Road Trip" is available now on kindle.

The novel is about a group of characters caught up in a drama of nuclear terrorism. John, Tressa, Aadhil, Travis, and Valeria along with Bear-Lee-a-Dog are sent by the government to an aging nuclear plant in the midwest after it has leaked radioactive gases. Within their group is a traitor. And ISIS, the radical muslim group, has made a selection of a city in the US to attack. The terrorists are quietly assembling the materials and people they need. Their plans are to far surpass the twin towers falling in New York City on 9/11. The characters intertwine in a tale of adventure, greed, murder, and lies.

Barbara's first book predicted that a nuclear power plant would fail with a catastrophic aftermath (The Nuclear Catastrophe). The Fukushima disaster in Japan unfortunately proved it to be true. This novel, written with Michelle McKeeth, points to what is in the future for the world - nuclear terrorism. Isis wants our country and is willing to take the steps necessary to conquer us.

We all tend to think that we are safe in our homes. But those in the world who have less...want more. Reading about what may face us in the future can prepare us.