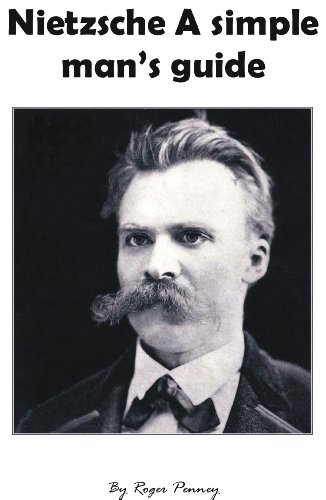 about this book: Was he mad, bad or just strange and deluded. For Post Modernists he seems to have the answer in The Overman, in German as the Ubermensch. Ivan Karamazov in Brothers Karamazov by Fyodor Dostoevsky said that, "if God is dead then everything is permitted". Aleister Crowley said much the same thing. "Do what you will."

The Marquis de Sade lived this out by hiring prostitutes and torturing them to death. That is what he enjoyed doing so that is what he did.

Coming back to Nietzsche; after his death his sister put together a Nietzsche Archive. She even published many of his miscellaneous papers under the Title, The Will to Power. Hitler grew quite friendly with her but though Mussolini sent Hitler a leather bound set of all Nietzsche's works it is doubtful if he ever read them. He was too busy overthrowing freedom and democracy and then attempting to conquer Russia.However Nietzsche's sister Elizabeth did manage to tell Hitleer that he was the Ubermensch. This must have been music to Hitler's ears; Wagnerian music of course.

The madman runs into the market place with a lighted lantern though it is midday. He cries out that, "God is dead, and we have killed Him." No one listens, no one realises the vastness of this crime and the terrible results which followed. Even now after two world wars and many, very many lesser conflicts and a plethora of tyrants, we still do not realise the enormity and how it has changed the world. Just as Nietzsche teetered on the edge of the abyss of Nihilism and eventually plunged into it and into madness; So now our world is on the very brink of despair, destrruction and insanity.

Nietsche opened the door, though The Enlightnement, Kiekegaard, and the German Higher Criticism had pushed it ajar. Darwin pushed a little harder. But it was poor deluded, lonely Nietzsche who flung it open.

Students of Philosophy, ordinary interested people, as students of other disciplines such as Politics, Theology, History and Sociology may all come across Nietzsche and feel bewildered. I write for those bewildered ones. I write for those frightened ones, I write to reassure, to tell how he really was and what he is still doing to our world that we might at least avoid the madness for ourselves, we enlightened ones.