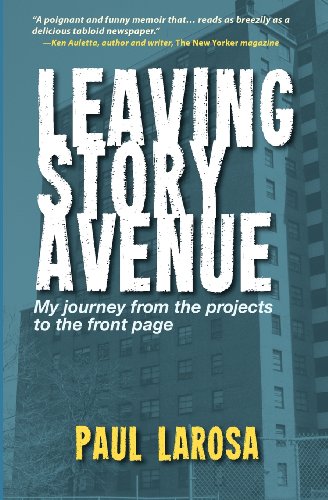 Book: Leaving Story Avenue - My journey from the projects to the front page by Paul LaRosa

about this book: This is my story of growing up in a public housing project in the Bronx and somehow finding my way to becoming a reporter at The New York Daily News, then the largest circulating newspaper in America. The News at the time was in the final throes of the Front Page ear; the city room was filled with larger than life characters, a place where Humphrey Bogart would have felt right at home.

During those years, the news in New York City was larger than life too. We had the city's brush with bankruptcy, the terror reign of the Son of Sam serial killer, the citywide blackout and riots and finally the horrible murder of John Lennon. I was there along for the ride and you will be too if you read this memoir.

It's been called "captivating and vivid" by The New York Times and Ken Auletta of The New Yorker Magazine says it is "a poignant and funny memoir."