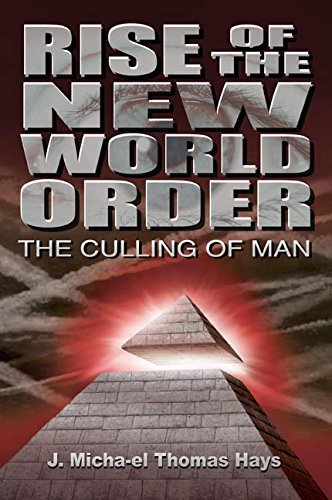 Book: The Culling of Man - Rise of the New World Order by J. Micha-el Thomas Hays

about this book: This is a book I began researching around 6 or 7 years ago after I discovered the existence of something called the New World Order. The New World Order is a secretive agenda that seeks to destroy the United States so we can be absorbed in the Luciferian one world government described in Biblical prophecy. I tell you what the New World Order is, how it started, who started it, who ran it through the millennia, who runs it today, and what their plans are for out future. Basically, the same occult group of people who have lorded over humanity from our inception continue to do so to this day, and I prove this all in my book.

Their agenda of forming a one world government has been in motion since around 2,000 BC and the inception of the Babylonian Mystery Religion, which was started by a tyrant named King Nimrod. I believe I have amassed the evidence to show that this man will be brought back to live using modern day DNA technolody, and is the Antichrist/Beast from the Book of Revelation, among other Biblical works that describe who this man is. Nimrod is the father of paganism, is considered the first Freemason, and is the man that all of our holidays are really based on, not Jesus Christ like you are led to believe. I've been receiving outstanding feedback since releasing the book at the end of January, and have compiled a testimonials page on my website, samaritansentinel.com

Video: Learn the whole story of the New World Order and Illuminati, its origins and future