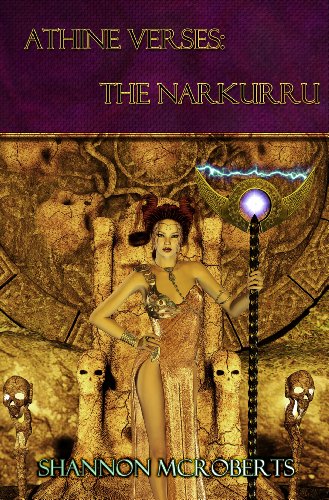 Book: Athine Verses - The Narkurru (The Daughter of Ares Chronicles) by Shannon McRoberts

about this book: I love playing MMORPGs. My first MMORPG that I really liked and got into was Guild Wars 1. I played with a great group of people called the Phantom Strike Force Clan {PSC}. They had several roll playing activities including writing stories; I think in a way that helped me reach my goal of writing something worth reading.

Now, my favorite character in that game was my necromancer named Obsidia. (Yes, that is partially where Obsidian Poet stems from.) Then when I switched to WOW I loved it more when Wrath of the Litch King came out. There I played a Death Knight with minions named Obsidia. (And NO! I had that name waaaay before Blizzard named that dragon Obsidia; like circa 2004).

While I was writing this book I had a great idea of writing about necromancy in some way or fashion. I had just read some book about a necromancer, but it wasn't quite what *I* thought a necromancer should be. I had just finished the first book in the Daughter of Ares Chronicles when all of a sudden I had the idea for this book that started out being about a necromancer. I decided to set it in Athine's world...so I had to work it into the lore of that world.

I'm also excited to let readers know that Isri, one of the main characters, makes another appearance in Athine Verses: The Blood Sisters.

(PS I'm sure by now you are probably wondering why my book titles are misspelled. I assure you they are not! I meant each book to be a "verse in the life of Athine", thus the Athine Verses designation. I just wanted something a little different)

Other books by Shannon McRoberts