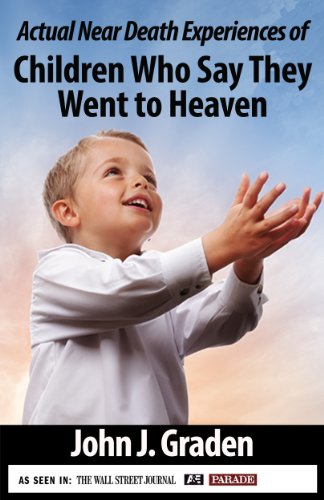 Book: Near-Death Experiences - Children Who Say They Have Visited Heaven by John Graden

about this book: This book profiles some of the most compelling near-death experiences (NDEs) of children.

Of they many unique details of the near-death experience of children is how often they encounter people and places from the past, present, and future that there is simply no way they could have known about prior to their NDE.

One NDE child in the book saw and recounted what his mother and grand-mother were doing and saying when he flat-lined. What's more amazing is they were many walls and doors away from where he was at the time. Though his mother kept him sheltered during his childhood and away from outside influences, he encountered God during his NDE and recalled many things that he had no prior exposure to. Incredibly, he had his NDE at nine-months old!

Another NDE subject asked his dad a question that caused him to lose concentration as he pulled the car right into the path of another car driving 60-miles an hour. Upon collision, his father was ejected from the car through the windshield. The boy said he had a clear vision of seeing his father flying through the air. He turned to the driver's seat to see the Devil sitting there. Grinning, the Devil pointed to the boys' dad and told him, "You just killed your daddy."

This is the fourth in a series of Near Death Experience books by John J. Graden. Graden is a member of Steve Harrison's Million Dollar Author Club and an inductee into the Self-Publishers Hall of Fame.