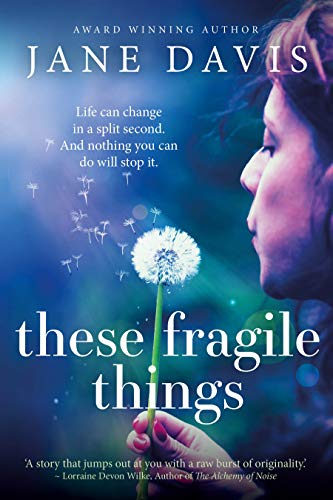 about this book: 'These Fragile Things' tackles the subjects of near-death experience and religious fervour. These are big issues. My aim was to bring the premise down to one very simple question: what happens to an ordinary family when their daughter claims to be seeing visions. Of course the dynamics of the family will shift, but can they survive it? This book is about the fragility of everything you hold dear and the threat of it being taken away.

I have a difficult relationship with religion, and by that I mean formal religion. I was brought up as a Catholic. As a child my life was filled with mythical beings and stories of great journeys and courage: of avenging angels; St George and the Dragon; Jonah and the whale; Noah and his ark; Jack and the Beanstalk; Daniel in the lions' den; David and Goliath; Samson who lost his strength when his hair was cut; Little Red Riding Hood and Goldilocks and the Three Bears. Be it Bothers Grimm, Hans Christian Anderson or the Old Testament, our imaginations were fuelled. Nobody seemed to consider the issue that children may not be able to distinguish between stories and 'the truth' and truth is very important to children. In those days, I didn't think that there was any difference between God and Father Christmas. As Elvis Costello would sing in the wonderful 'God's Comic', "Sometimes they confuse me with Santa Claus. It's the big white beard, I suppose." But heaven forbid you should confuse fairies with angels, and so you were expected to learn: The Bible is true, Jack and the Beanstalk isn't. Except that it doesn't end there. 'What, God didn't really create the world in seven days?' 'No, that is just an illustration.' 'But everything else is true?' 'Yes, everything else is true.' 'Including the Prodigal Son?' 'No, that's a parable. Parables are stories that illustrate issues and have moral endings.' 'Like fairy tales?' 'No! Not at all like fairy tales.' And now that we have so much more knowledge and archaeological evidence, it is being suggested that more and more was illustrative.

It seems to me that everyone worries too much about how children will react when they find out that Father Christmas doesn't exist. They spend far less time worrying about the moment when their brood stops believing that God exists. There is very little preparation for that. I suppose that with Santa Claus, the impact of the blow is softened by the fact that stockings are filled with presents regardless. Where is the softener with regards to God? Who's left steering the ship? Childhood is frightening. You can see that from children's reactions to announcements of the end of the world this week.

But you don't become a lapsed Catholic overnight. I have returned to church many times over the years: when suffering from depression; for births and marriages; and particularly when mourning the loss of friends. Religion, at its best, brings people together to offer comfort and support and to celebrate life's big events. I miss so much about it: singing in a big choir; the setting aside of Sunday as a special day, a day of rest and for family and friends, and a big roast dinner. But you can't ignore all of the terrible things that have been done in the name of God. Karen Armstrong wrote 'In the beginning, man created God.' If that is true, it was either his most beautiful or his most diabolical creation.

And then, later, my work in insurance, forced me to deal with that wonderful question, 'What is an 'Act of God'? A legal term that's still in use.

The book is certainly about conflicts. A father who claims that God answered his prayers for the his daughter and hails her survival and subsequent recovery a miracle. Who converts to Catholicism against his wife's wishes. A mother who was present when the ambulances took her daughter away and knows with absolute certainty that it was men who saved her. Who seeks a scientific explanation. Who feels that sides have been taken against her. Can a marriage survive those differences in opinion? And then there is Judy who has to make sense of why she survived a near death experience and its terrifying side-effects. Who, as an only daughter, tries to make diplomatic choices while treading her own path, wherever that may take her.

The book's setting is Streatham, South West London, in the Eighties. I wanted my starting point to be ordinariness, albeit that there is a strong sense of instability and intimation of a disaster waiting to happen. We have an accountant father who reads 'Just Seventeen' on the train and is horrified at how the media want to mould his daughter; a housewife who feels she is becoming increasingly invisible and longs for an escape from routine; a daughter who wears Garfield slippers and can't work the washing machine, and hates the fact that her parents listen in on her telephone calls. When researching visionaries, I came across the story of 'Our Lady of Surbiton,' which is quite close to where I live. Streatham is also close by, but has a more urban feel. To begin with I simply substituted the change in location into my working title. Streatham is somewhere I used to visit in my teens, mainly to go ice-skating. In recent years, it has mainly been where I have sat in traffic jams on the A23 on my way to Brixton Academy. But it was once a genteel area and had the longest high street in Europe, which was the favoured shopping destination for princesses. It has a variety of housing stock which attracts a mixed population. By the Eighties its reputation had been tarnished by a notorious Madame Mrs Cynthia Payne and shaken by the overspill from the Brixton riots. I chose the Eighties for several reasons. Firstly, it was the decade when I was a teenager, and I was trying to get back into the mindset of a teenage girl. There was also the fact that I couldn't find a more fertile decade for Marian visionaries within my lifetime. I also wanted to write about a big event that I could bear witness to: the Great Storm of 1987.

The Great Storm was a very surreal experience for me. I was on holiday in Cornwall with a very good friend of mine, Benedict Ludwinski (where are you now, Ben?). The last night of our holiday, to be precise. I was woken in my room in the B & B with the bed shaking and my initial reaction was that it was an earthquake. I made the decision to hide under the blankets, but the shaking subsided eventually and I must have fallen back to sleep. The next day we travelled back to London by coach and, as we neared the Capital, the devastation got worse and worse. We had been out of touch with the news and had no idea what had happened. It was only later that I learned a storm could have caused this level of damage. My job in those days was handling insurance claims, and I spent the following two to three years dealing with people whose lives and livelihoods had been affected, and so I shared their stories. The demand for builders was so high that we still had some outstanding claims when the next big storm struck in 1990. I don't know why but, faced with buildings that had been toppled and injured people, it is the images of the trees that have stayed with me. Trees, that had stood tall for hundreds of years, toppled like dominos.

There is a tree in the book that is almost one of the characters. I'm lucky enough to live in an area where there are several good parks and I walk in all seasons, so trees are my calendars. There are many ancient examples, including one in Beddington Park that Elizabeth I is said to have sat under. During the writing of the novel, several of the large trees in the park either fell down or were felled because they were rotting from the inside out. I got a very good feel for the size of them and the extent of damage they could have caused. Carshalton can also lay claim to the tallest London Plane Tree. The tree that I describe is actually in Honeywood Walk. It's a magnificent thing and I hope it outlives the lot of us.