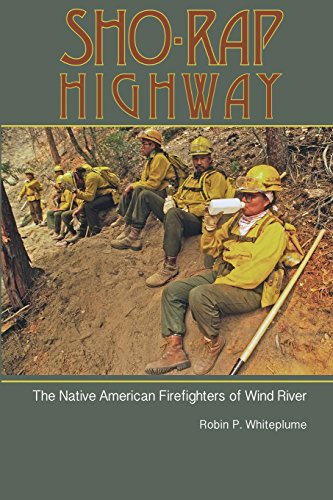 about this book: The book is a compilation of the historical formation of the Sho-Rap firefighting crews of the Wind River Reservation. The information was gathered through contributions from archived materials, newspaper accounts, historical books, and from former Wind River forester Roy Montgomery along with passages from Karl Brauneis, retired Forest Service officer. The Sho-Rap story is more than just about firefighting but the struggles to adapt to a changing world around the Wind River Reservation. The nation's native populations already had experience in the wildlands of America and their abilities with fire are well documented but the means to integrate them into firefighting world took some help.

Although the nation's tribes had problems with white settlement and the armed forces that protected them it took training and resources from the government to marshal the native fire crews into action on a large scale. The Indian legacy of wildland firefighting really began during the Civilian Conservation Corps era of the 1930's, intensified with crews being formed in the Southwest United States and carried forward through the Rocky Mountain and Northwest areas. Eventually the Wind River forestry program joined the field in 1967 with their own crew bosses and hundreds of fire line ready crewmembers. As of 2017 the Sho-Raps have been in formal existence for 50 years and have yielded thousands of fire veterans and generated millions of dollars in wages throughout the years.