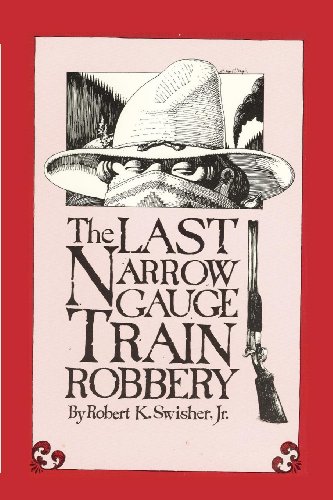 about this book: I wrote this novel because one day riding a narrow gauge train through the mountains I felt sad for the train. Instead of hauling miners, gamblers, and other suspicious character - both men and women - it was now reduced to hauling tourists complete with short pants and a multitude of cameras. At a lunch stop bandits dressed in old west outfits rode out of the trees and staged a fake robbery. For weeks after the trip I pondered the fate of the train - how depressing, then, I had an idea for a book.

Four old hippies, now grown up and trapped in the real world like everyone else decide they have to rob a narrow gauge train because the train is sad. They draw up a plan that is not a robbery per say but an elaborate scam. They do not plan on keeping the loot, but all plans have a hitch. One hitch being, the train engineer has a dream that the train that he loves in someway in danger and he starts carrying a shotgun. The Last Narrow Gauge train Robbery is a sly look at the modern world. It was optioned for several years with no results. A wild and winding tale of four modern Robin Hoods that happen to forget our modern laws could care less about Robin Hood.