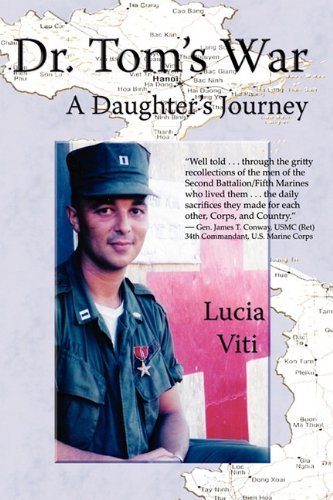 about this book: My father, Dr. Tom Viti, served as a Battalion Surgeon assigned to the Second Battalion Fifth Marines (2/5), 1st Marine Division in An Hoa, the Republic of South Viet Nam during 1967. While searching for photographs in my brother's New York attic in 2001, more than 20-years after Dr. Tom's passing, I stumbled upon a box containing his Viet Nam memorabilia, the contents of which left me breathless, for nothing that I discovered was anything that I had ever known. I knew that I had to infuse these dormant memories with the life and recognition that they so richly deserved. The Dr. Tom discovered in this box was a man I had never known.

From the pieces gathered from this treasure trove, I spent almost two years travelling America to interview 2/5 Marines who stood alongside the Brooklyn, Italian Maverick Doctor. In an effort to reconnect with the man I loved more than life itself, I gathered quips and quotes from those who knew him best. "Dr. Tom's War – A Daughter's Journey," is a narrative memoir depicting a unique journey of discovery, not only of my father's life as a Battalion Surgeon during one of America's most controversial wars, but for the many 2/5 Marines stationed in Viet Nam – a silent majority of men willing to share untold stories. These men were eager to share their secrets with me - not only in honor of my father - revered as most medics were, but because they were no allowed to more than 40 years post fact.

Although "Dr. Tom's War - A Daughter's Journey" is a deeply personal tribute to my father, Dr. Tom stories cover one-third of the manuscript. Although he, unlike most physicians, spent more time in the "bush" than his fellow officers preferred, his dealings with most were short, concise and medical. Thus, "Dr. Tom's War – A Daughter's Journey" includes a series of stories from 2/5 combat Marine veterans who shared their Vietnam experience. Chapters are separated by personal narrative 'Dear Daddy sthat bridge my voice to the memories of 1967. My voice, albeit small, introduces the courageous men who fought to protect America by sharing a conversation with my daddy.

Research for "Dr. Tom's War - A Daughter's Journey also included four years of reading everything and anything I could get my hands on. At times, I felt lost and out of place. How odd - me - the athlete of the family, the professional writer who spent years in health, fitness and wellness sharing a journey of war. I read more everyday, frightened to face the page. And when I couldn't pick up another book or government document, I watched every good and bad Hollywood movie and history documentary on the market, including others from all wars. The hardest part of writing Dr. Tom's War was facing the page. Facing the page was to acknowledge that the man I needed to talk to the most - my father, was not here. I spent many, many days isolated on my Vietnam Island - feeling as though I was losing my mind. My life became this thing called Viet Nam!

"Dr. Tom's War – A Daughter's Journey," affords its readers a birds-eye-view into a brotherhood from the voices of the young men following in their father's footsteps, the World War II heroes - the men known as the "Greatest Generation." Dr. Tom's War shows how these men were treated like criminals - having fulfilled their duties requested by their country. Weaving the Marine Corps Esprit de Corps with the horrors of war, "Dr. Tom's War – A Daughter's Journey" also provides a first-hand perspective on combat life 'in-country' during 1967. These men lived like animals, some days drowning in monsoon rains or swimming in dry, red dust. And yet, when asked if they would do it all over again - even knowing what they know now, only ONE responded, "No." The "Yes's" came in a heartbeat.

"Dr. Tom's War – A Daughter's Journey" not only appeals to veterans, it attracts an audience hesitant to embrace a military read. This manuscript is for every family member associated with the thousands of Viet Nam veterans. Through style and prose, I offer my generation of Viet Nam Veteran children, those too young to understand what was happening in 1967 and too old to have studied the Viet Nam War in college, an understanding of what these men sacrificed in their own words. I'm a child among many who remained silent while their fathers were described as "baby killers fighting a dirty war." This scrapbook remains a testament of love to every father who fought to protect America from Communism. I am a woman forever changed by Dr. Tom's War.

I chose the cover photo for Dr. Tom's War - A Daughter's Journey in honor of one of the many medals my father received during his service as the Battalion Surgeon for 2/5. Dr. Tom is sporting his Bronze Star with a Combat V - a medal given for his bravery that included the V for Valor. From beginning to end, the writing of Dr. Tom's War - A Daughter's Journey took severn years from beginning to publication date. I will admit however, two of those years were spent looking for a publisher. I have no regrets. Well, I do. I wish I had more confidence in the beginning because I was really proud and pleased with the final product.

I have and will continue to diligently market Dr. Tom's War - as I consider it a must read for everyone!

I was one of Dr Viti,s corpsmen. The only person who ever gave me a reason to steal. He needed an air conditioner for an old disabled Amtrack used as a operating room. I had to go to Danang to get the air condition unit. I would like to thank the Air Force pilot who donated his window unit. LOL. He was a good man, and I was proud to serve with him most of the year, 1967. [by James Langford]