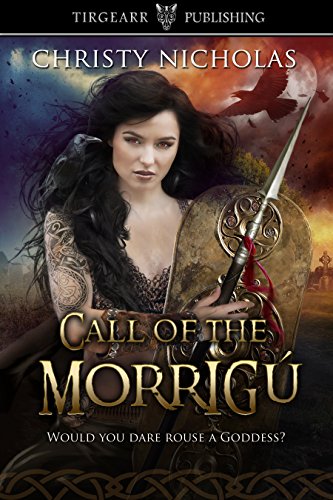 Book: Call Of The Morrigú by Christy Nicholas

about this book: Would you dare rouse a goddess?

When Reginald Latimer decides to play antiquarian and starts digging up suspicious-looking mounds on his cousin's Irish estate of Strokestown, he finds much more than he's bargained for. He accidentally wakens a goddess from the pages of Ireland's violent mythological past, the Morrigan.

As the goddess of war, the Morrigan is fascinated by the current revolution of 1798, and becomes embroiled in the politics and warfare of the age. In the meantime, Reginald and his granddaughter, Theodosia, attempt to mold the Morrigan into their version of a proper modern woman.

It doesn't work out as they expect.

There are many stories out there of a wakened immortal entity, but most show them as immoral monsters, bent on world domination or destruction. I wanted to show something different - a goddess with human sensibilities and human foibles. So come on the adventure and dive into the 1798 Ireland!

This book contains some graphic violence and sexual themes, but no overt sexual descriptions.

I hope you enjoy the story!

Other books by Christy Nicholas (more)