Book: The Guardians of Karma by Mohan Vizhakat

about this book: This book is a fast paced anachronistic fantasy set during a period of human history which is mysterious yet fascinating. The main inspiration for me to write this book was the study of the following:

1. The references to the use of advanced technology by the ancients within many Indian historical scriptures
2. Reference to the the worldwide deluge within many scriptures around the world
3. Similarities between the problems faced by humanity during the ancient age and today, especially with regards to global warming, over consumption of resources etc.
4. Exploration of spirituality as a science
5. Scientific exploration of the philosophy of Karma and its meaning to human condition with regards to free will and spirituality
6. Fragility of our present 'second wave' civilization
7. Following questions:-

(b) Did this event happen during the 'first wave' of advanced human civilization before the great worldwide deluge towards the end of ice-age?

Brief theme of the story:-

Around 10500 BC, with sea levels much lower than it is today and mainland continents largely covered with ice, the primary centers of human civilization were based around many large tropical islands, and dominated by two technologically advanced nations – Dev Lok and Daityan Empire. Spiritually inclined Devas lived in harmony with nature using subtle astral engineering techniques of cooperative existence with lower life forms, whereas Daityas believed in brute force technologies for rapid prosperity and material gratification. Steady inundation of tropical islands towards the end of ice-age created a crisis, particularly for the Daityas. To fuel their hunger for material resources, the aggressive Daityas are compelled to invade other nations. The karmic path and spiritual journey of the Bheeshma warrior monk Haŕa leads him to become the sole hope of the Devas to avert abject subjugation. However, in order to help them he must pass the ultimate test of spirituality and be willing to merge with death itself.

The story unfolds the philosophy of Karma, within the backdrop of love, passion, greed, war, tragedy during the period that marked demise of the 'first wave' of advanced human civilization and laid foundations for emergence of a new one. 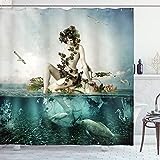