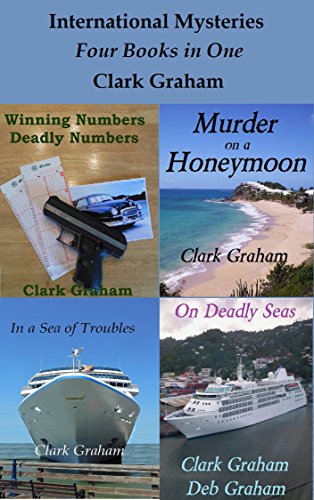 about this book: Four books in one. Follow the adventures of Jack Warden, a detective that is trying to get out of the shadow of his father and prove himself in the quiet town of Colfax Washington.

In Winning Numbers Deadly Numbers Jack finds that his mentor, another detective, has disappeared in what appears as a double homicide. As everyone chases down a missing lottery ticket worth ten million dollars. Dead bodies are popping up all over town as everyone is after the winning numbers. Little does Jack know that his search for the killer will take him halfway across the world.

In Murder on a Honeymoon, Jack has found true love. She wants to get married in the Caribbean and then go on a nice quiet honeymoon. Things go wrong from the start when the priest that was going to perform the wedding is missing. Jack goes out to search for the priest but finds himself in the middle of a full blown gang war.

In a Sea of Troubles Jack is trying to make up for a lousy honeymoon, he lets his new wife talk him into a cruise on the high seas. He soon discovers a conspiracy that could have international repercussions and cause the death of thousands if he is unable to stop it.

Failing to give his wife that wonderful cruise, they try again. On Deadly Seas we find the young couple and their friends on ship that has a mysterious sickness. Jack is called in to help when half the ship falls ill. He must race to find a killer and a cure before it is too late.