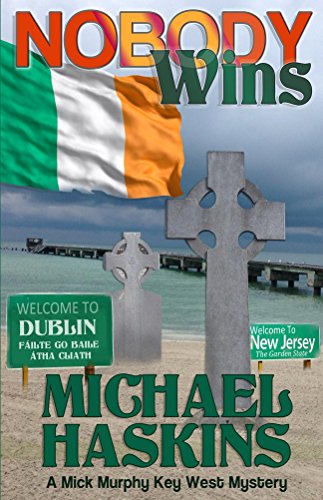 about this book: NOBODY WINS takes Mick Murphy out of Key West on a long journey to find his cousin Cecil Fahey. While band-and-forth between Key West and other locations, Murphy and his ex-drug smuggler friend have to deal with Cubans trying to kill them, angry British SAS soldiers, MI6, the IRA and an irate FBI agent once Murphy returns to Key West.
In L.A., he visits an old, favorite Irish Pub only Cecil is gone, but an old IRA gunman is there and talks about where Cecil may be. Leaving, Murphy has a run in with SAS/MI6 and is taken and interrogated while kept hooded.
With his black bag friend Norm at his side, the two are attacked after leaving the pub.
The search for Cecil continues, but things don't get better as Murphy and Pauly slog through the February weather of the Northeast and finally make their way to chilly Dublin. Dublin proves more dangerous than the states, as a finale happens in a graveyard full of Celtic crosses and ghosts of Ireland's past.
Home but not safe, the finale all but destroys Murphy's murdered finance's house, as the Cuban make a last attempt on his life. From Key West to Dublin, Murphy travels and disaster follows.