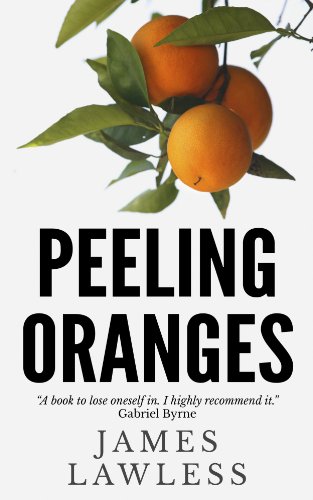 about this book: Peeling Oranges: The Provenance of a Novel.

In the nineties I wrote a short story called Diaries about Derek Foley, who sifted through the diaries of his late father, a diplomat in Franco's Spain, and discovered things to question his paternity. I showed the story to Bernard Farrell, the playwright, who praised it and found what he called a mystical quality in it.

I left the story at that for a number of years, became academic and did an MA. But eventually I went back to the story. Something like an itch or an ache was irritating me. T.S. Eliot described non-creativity in a creative artist as a type of constipation, so maybe it was something like that, something incomplete in the character of Derek Foley who carried uncertainty around with him as he says like a 'wound'. I had got into the habit of researching by this stage, having just completed a thesis on poetry as communication. I found myself in the newly opened national archive in Dublin researching about Spain and early Irish diplomacy, stuff which had been covered up in the past, particularly about Spain and Ireland's involvement in the Spanish civil war. Slowly, a bigger story began to unfold, and this character Patrick Foley, the diplomat, the dead guy in my short story, began to resurrect.

While many Irish novels have dealt with many aspects of Irish history, to my knowledge this was the first time that Irish diplomacy in Spain figured as a motif. I kept seeing parallels between two emergent nations— Ireland and Spain, on their respective turbulent journeys towards democracy: the civil wars, the poverty, the role of religion, the artistic blossoming: Yeats with his theatre, Federico Garcia Lorca travelling throughout the country with his standup players, with fatal consequences it should be added. Just as things were covered up in Ireland, Franco covered up things too—he always denied any involvement in Guernica or in the killing of Lorca.

Martha, the protagonist's mother, was a woman from the Liberties and she knew what poverty was from her social work and she shared that empathy with the Spanish poor. But if this novel is about anything, it is about ideology: how it drives people to behave in certain ways. What holds up their part of the sky, as Patrick Foley wonders about Gearóid MacSuibhne when he visits him in his squalid cell in Burgos prison. And Patrick himself, with his religious/sexual contradictions, is even more complex than Gearóid with his to-the-death republican convictions.

In contrast to all of this, the protagonist Derek Foley is apolitical, affording him an outsider's view of things until he is drawn in of course by his love for the supreme ideologue, Sinéad Ní Shúilleabháin.

The original title of the novel, before it was changed for what was considered simplification, was Perceiving Oranges. This was prompted by Ortega y Gasset's intriguing line 'No one has ever seen an orange'. An orange after all is a sphere. So what I was trying to express was that we all have only partial perception of the world; no one has the whole truth—as professed by some religions or ideologies rendering them inflammatory, something Derek observes on his journey north. The hubris of the all seeing eye is really the limited vision of súil amháin.

Derek got more and more apolitical the more Europeanised he was becoming, reflecting a modern Ireland perhaps moving away from its insularity towards the joining of the EEC in 1973, the significant year when the novel ends

What would Pearse have made of you, Derek? Sinéad says, berating him on his return from Spain when he is critical of her narrow nationalism. It was not of Pearse, Derek was thinking, to look ahead with monovision as the 1916 leader had instructed on the 'ród seo romhainn', but of Picasso and his woman with eyes seeing in many directions simultaneously.

However despite my nostalgia for the old title, the symbol of the orange remains: His peeling of the oranges to ease his mother's emphysema also marked Derek's attempt to peel away the layers of secrecy to get to the truth of his origin. We are covered in seven veils, his mother said, and no one sheds them all.

Oranges were the only food available to keep Gearóid alive in the trenches during the civil war in Spain.

Oranges became a self-fulfilling prophecy in Yeats' words indeed as euphemisms for the IRA bombs that blew up the medieval city of Coventry in 1939.

All the symbols, oranges, lilies, poppies, badges, flags or symbolic actions were, as Martha relates to Derek in a rare revealing moment, the provenance of future directions in life.

And what of the old Liberties, alas decimated now, with motorways ploughing through what were once lanes redolent with their labyrinthine mysteries? Brendan Behan considered anyone who lived beyond Dolphin's Barn a culchie. Martha's mother, who sojourned temporarily in Aughavanagh Road, couldn't wait to get back to the Liberties because of loneliness

Liberties folk were in the main people who Martha claims, contradictorily to Derek's chagrin (because of her own reticence), wore their hearts on their sleeves; they were not afraid to express emotions—the humour and the sadness of life, which in our more sophisticated age are perhaps more nuanced now. Such open qualities were exemplified in Martha's Huguenot friend, Mrs Chaigneau.

The suburb is represented by Rathfarnham in the novel, perhaps unfairly represented as a cold place to Martha and Derek, but that had more to do with her circumstances than the place itself. The flight to the suburbs, the phenomenon of the fifties where the suburb was seen as the panacea of all ills, a subject in itself and which is the central preoccupation of a later novel The Avenue. But to Martha and to Derek, Rathfarnham represented a place of great trauma and a place that could not be called home to them.

Of course the jolt for Martha was triggered not merely by an internal migration but by a very real emigration—exile to Madrid away from the smell of the Guinness hops and the bakery smells from Jacobs. Exile: a form of dismemberment, according to Patrick, quoting Colmcille. Martha, however, witnessed the same poverty as she did in the Dublin tenements and heard the universal cry of want in the Madrid streets.

But what of Patrick Foley and the world of diplomacy? What was hidden in those archives that de Valera for so many years did not want us to see? He censored the media coverage of the War years to ensure our neutrality, another policy he shared with Franco, despite overtures from Hitler. Things were covered up to keep emotions down.

What is a diplomat? Derek tried to find out through Patrick's diaries? From the Greek diplomas, the keeping of documents. Patrick when seeking refuge in the Pyrenees during the Spanish Civil War had time to reflect on his role. Early Irish diplomacy was seen on the European stage as simply an adjunct to British colonial policy. But by recognising the Franco regime before Britain—and this was crucial—it meant Ireland was now perceived as an independent state. This had huge national and international significance: In 1939 Patrick Foley was instructed to return to Madrid to attend Franco's victory march. This was taken to mean in diplomatic circles that Ireland recognised the dictatorship, something which Britain had not done. The outcome of such action was that Ireland was now seen as an autonomous state on the international stage.

However the hub of the novel is the discovery of Patrick's impotence. Hence the quest for paternity which brings Derek on his own adventure to Spain and to Northern Ireland through all the variations of orange to discover in the thick web of history and religion and ideology, who his real father was.

And of course along the way there was Love.

I like to think of Peeling Oranges as a love story first and foremost and the quest is not so much for paternity but rather for maternal love initially which of course coloured the way he looked upon love later as an adult and his confusion with Sinéad, compounded of course as we have already said by her ideology. The bullying incident in boarding school clarifies what Derek felt all along: the lack of love, that his mother did not love him is evident as he seems to be unable to stand up for himself when she packed him away rather mercilessly to boarding school because his prying into her past was appearing to get out of hand.

Sinéad, the love of Derek's life, the childhood sweetheart, the remembrance of her as the little breastless kid on the Dublin beach, and now suddenly before his eyes transformed from that chrysalis to the university student endowed, as Derek suddenly realises, with all the curves and bumps of womanhood.

But how could he crack that nationalist shell that cocooned Sinéad so tightly in her single-minded purpose? It is the core dilemma of the novel: Is ideology stronger than love? And it is only towards the end of the story that we get some clue to the answer.

Myth and mythmaking are essential parts of storytelling. Someone said the artist should never lose out on a good story for the sake of truth. Perhaps the word accuracy or fact should have been the word used, for the artist is always true or at least striving for a higher truth, a poetic truth, a verisimilitude which strips away the bare facts which sometime can overpower us and blind us in our vision like Dickens' character Mr. Gradgrind in Hard Times. 'Now what I want is facts... Facts alone are wanted in life.' Or Shakespeare's Shylock in the Merchant of Venice demanding the letter of the law but failing to show mercy.

Myth of course has two meanings: the myth of old stories, the old legends which Martha relates to Derek as a minatory tale in the story of Labhras Loingseach and the king who had horse's ears. But to the annoyance of the mother it didn't have the desired effect as we shall see.

But then there is the other kind of myth: the dangerous modern myths that we try to convince ourselves are true. The myth of history. The way we paint the world with our own colours so that Derek when he becomes a history lecturer actually delivers a lecture entitled 'The function of myth in history'. He poses the question, What happens when the myth is broken down?

The Irish language which features strongly in the novel could perhaps be saved if it had been stripped of its ideological baggage as Derek observed while he spoke it freely on a Spanish beach. But it was all tied up with Sinéad and the nationalist cause of Pearse's vision of 'Éire gaelach, Éire saor'.

One is made to wonder sometimes if Sinéad saw Derek as a human being at all. Did she notice the love light in his eyes, or was he for her just a concept, a comma in a theory? And so the recurring question: did love win out, or ideology? As Derek listened to the sound of Sunday church bells, he concluded that even bells had their rhetoric. So one was left to wonder the outcome, until at the eleventh hour a new player entered the fray.

The first time early Irish diplomacy has been treated as a motif in fiction.

• 'A book to lose oneself in. I highly recommend it.' — Gabriel Byrne, Hollywood actor and writer.