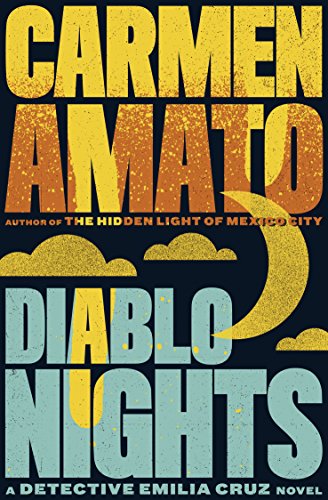 about this book: I found MEXICAN MARTYRS in a bookstore near the Vatican. The cover was black, with a cross made of two bloody slashes.

The book was about Mexico's Cristero War of the 1920's, when the government tried to squeeze out the Catholic Church. The most compelling chapter was about Miguel Juarez Pro, known as Padre Pro, a priest caught up in the government's religious purge and executed in 1927.

The story of Padre Pro became the hook for DIABLO NIGHTS, the third Emilia Cruz mystery. Emilia is the first and only female police detective in Acapulco. The city evokes pristine beaches, luxe resorts, and fabulous shopping. Yet it is one of the most violent places on earth, as drug cartels battle over lucrative drug routes into the US.

Emilia lives between these two versions of the iconic Pacific city. As in the first two novels in the Emilia Cruz mystery series, CLIFF DIVER and HAT DANCE, her life and career are perpetually balanced on a knife edge.

In DIABLO NIGHTS, a religious relic purported to be from Padre Pro and a cruise ship murder victim propel Emilia into a maze of cartel smuggling and revenge killings. Ora Ciega, a rare heroin strain from Colombia, is found on the cruise ship body, promising more drug war violence for Acapulco's already bloody streets. At the same time, the relic points toward a gruesome kidnapping case.

Nothing is clear as Emilia and her partner, senior detective Franco Silvio, find more victims: Yolanda Lata, the mother of a girl for whom Emilia has been searching; as well as a dead Customs official who had valuable information about the cruise ship murder. When stalkers shadow Emilia, it must be proof she's getting close to the Ora Ciega smugglers.

Or is she getting too close to a rookie detective she's assigned to train? Detective Flores is fresh out of college. He's thrilled to be playing cops and robbers with his new mentor.

The destinies of Ora Ciega, the religious relic, the rookie detective, and the missing girl merge into a fateful trip into the hills above Mexico's Costa Chica coast south of Acapulco. In a lonely place where vigilante groups have replaced civil authority and the crash of surf competes with gunshots, Emilia will face the biggest challenge of her police detective career. But it's nothing compared to the shocking climax waiting for her back in Acapulco.

But what about Padre Pro? Well, you'll have to read DIABLO NIGHTS to find out the connection between a 1920's martyr and Acapulco's first female police detective.

It's an unexpected mystery. But then again, aren't they all?