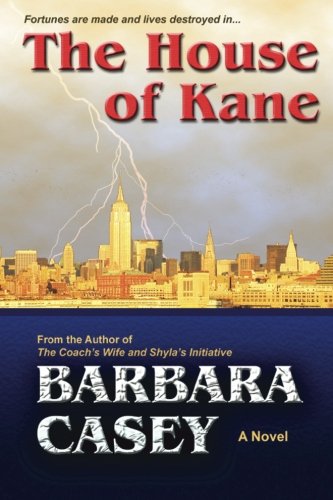 Book: The House of Kane by Barbara Casey

about this book: The shopkeeper was standing by the door when Aislinn got there. "I was expecting you," he said when she entered the botanica. For some reason it didn't surprise Aislinn when he said it. He noticed that she was wearing the blue and white beads and smiled. "This is good," he said. That didn't surprise her either.

Enter the world of bestselling publishing, filled with intrigue, power, betrayal, ambition and greed. Yet for Aislinn Marchánt it represents the attainment of a life's dream, a point of destiny, as she is caught up in the storm that is the House of Kane.

Aislinn Marchánt, a writer and editorial consultant, is hired by the major New York publishing company, Kane Publishing House, to help determine why several submissions sent to them have mysteriously disappeared only to be published later by another publisher. Are the editors at Kane simply not being diligent enough with the in-coming material, or is there something more sinister going on? Working from her West Palm Beach home, Aislinn quickly becomes involved with the House of Kane as well as with Caldwell Kane, the man who hired her.

As Aislinn works toward uncovering the various layers of truth that not only involve Kane Publishing House, but her former husband and her elderly neighbor as well, she continues to research her own novel, the story of a love between two people that becomes fractured because of the misunderstandings created by two different cultures. Her research takes her to a botanica where a Santerian priest reveals the truth in her own life and a destiny that is joined to that of Caldwell Kane.