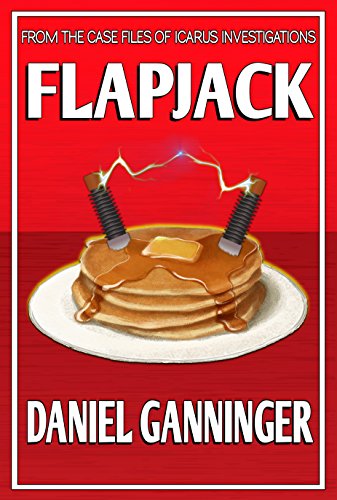 about this book: Case File #1 of Icarus Investigations

Take two new private investigators, an ex-NSA computer expert, a couple of strong, beautiful women, add in a some scientists caught in the crossfire, a threat by the FBI, and finish it off with a dash of bad guys that include a U.S Senator, a devious billionaire, and a multinational security company, and you have the recipe for the action/adventure mystery, Flapjack.

Murphy and Galveston form Icarus Investigation so they can get quit their mundane cubical jobs. The two self-proclaimed private detectives use a creative approach to their investigations, along with a healthy dose of humor and questionable tactics. But things become serious when they find themselves mired in the case of a lifetime.

A device has been stolen, a key to all the world's energy problems, and Murphy and Galveston are tasked with finding it and its inventor, before being thrown in jail by the FBI, and before some other unscrupulous characters get to it first.

The pair criss-cross the world in search of clues, and what they find becomes increasingly unsettling. Who is ultimately in control of the device and what do they plan to do? Is it the huge multinational security firm, a devious billionaire, or a questionable member of Congress? The detectives slowly work out the clues, berating each other every chance they get, but find they have turned from the hunters into the hunted.

I really enjoyed writing this book and wanted to take readers around the globe, as well as provide a different take on the characters that can do it all. You won't see characters that can fight twelve bad guys at one time, or get every beautiful woman they meet into bed in ten seconds flat. These characters have flaws, some good, some bad, just like we all do. So join in the fun and take an escape to find out how two average guys could get themselves involved in a conundrum of epic proportions.