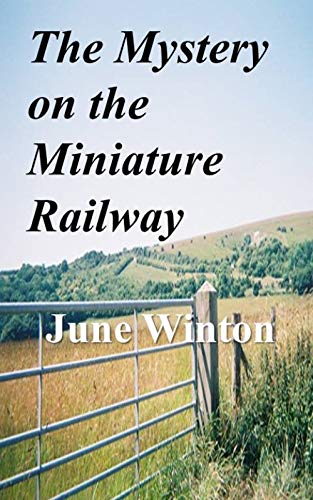 Book: The Mystery on the Miniature Railway by June Winton

about this book: This book was inspired by the world's longest miniature railway, The Romney Hythe and Dymchurch Railway (RHDR), which terminates at Dungeness, a nuclear power station built on a beach on the edge of a marsh in the middle of nowhere. In the book names are changed to RHLR and Downsend.

A nuclear professor boards the train carrying top-secret plans for a nuclear processing plant to be built to store all the country's nuclear waste and convert it to harmless energy in a vast underground bunker at Downsend. This would, of course, involve a lot of disruption and upheaval for those already using the marsh.

When the train arrives at Downsend the professor is missing. It seems not everyone is happy with the government's plans...

I was inspired to write this book because I have a holiday home by the RHDR, so every half an hour a little train drives past and blows its horn. I can see the train from my balcony and can smell the steam as it blows past. I have a timetable for the railway and lots of cute pics, but as I don't have official permission to use them I have had to change all the names and places in the book.