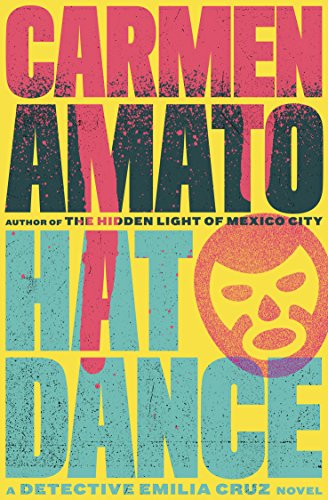 about this book: HAT DANCE is the second novel in the Emilia Cruz mystery series. It follows CLIFF DIVER, the novel that Kirkus Review called "Consistently exciting . . . a clever Mexican detective tale that will leave readers eager for the next installment in the series." Well, HAT DANCE is it.

In HAT DANCE, Emilia will keep a promise to look for a girl from her own neighborhood who has gone missing, while at the same time she must investigate a string of violent arson attacks on prominent Acapulco restaurants. Neither investigation will be easy, because this is Acapulco, a place where corruption is the backdrop for every move Emilia makes, a place where the influence and impact of Mexico's drug war is everywhere, just like the salt breeze coming off the ocean.

The question in the Emilia Cruz series is different from most mysteries. It isn't so much of a question of whodunit as much as will she survive it?

Emilia Cruz, the Acapulco police department's first and only female detective, is a good liar, a fast thinker, a determined investigator and a mean kickboxer. An Acapulco native forced to grow up too fast, she's been a cop for nearly 12 years and a detective for two; a strong Latina woman in a squadroom that didn't want her and is still trying to break her. But Emilia isn't afraid to defend herself and get what she's rightfully earned. She knows that many women in Mexico don't get the chances she's had. The proof is in a log she tracks of women who have gone missing.

So why a mystery series set in Acapulco with a female police detective as the main character?

1. Acapulco is a prize being fought over by rival drug cartels. For better or worse, inspiration for new books is in Mexico's news every week.

2. The city is one of my favorite vacation spots but it's not just about the tourism. Acapulco has two faces; one of luxury and one of poverty. Both will claw at Emilia and force her survive between them.

3. The culture of machismo is still going strong in Mexico. A woman in a traditionally male bastion—the detective squadroom—promises complications and tension.

4. The US audience already knows the iconic city of Acapulco. The catchy name is associated with surfing, spring break, and Old Hollywood.

5. Movie potential. Crime and sex on the beach. Need I say more?