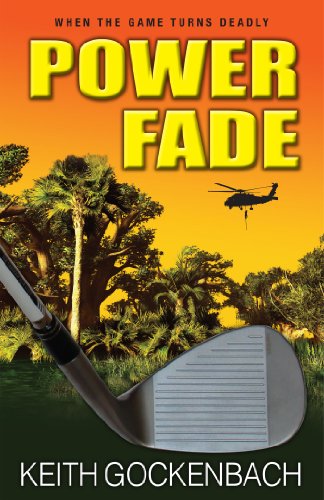 about this book: Interview with Roy Gilbert, The Protagonist in Power Fade

Note: Power Fade is a mystery set against the backdrop of professional golf. In the opening of the book, pro golfer Roy Gilbert wakes, defenseless and alone, in the Everglades wilderness. You can find the book at www.insidetheropesgolf.com. The author is Keith Gockenbach, a former senior professional golfer.

Keith: What was the most frightening part of the book for you?

Roy: Realizing that I was all alone in the Everglades swamp and that darkness was approaching quickly. I grew up on a ranch outside of Houston, Texas, but I'd never been much of an outdoorsman. There I was, a professional golfer, slogging around in the muck, searching for my friend John, and unable to find him. The sun was going down and I couldn't remember a thing about the last few minutes of our sightseeing flight over South Florida. One minute John was flying us in his small Cessna, the next I was waking up next to the wreckage in the swamp. All I could think about was alligators, water moccasins, and mosquitoes.

Keith: After you escaped the swamp and the threats from the helicopter, what was the most frustrating thing about the story?

Roy: You would never let me know what was really happening. John was missing and presumed dead, but I could never be sure, since I couldn't remember the last minutes of the flight. Maybe John was still alive and hiding from the people who had tried to kill us. I was a last-minute passenger on John's recreational Cessna. It was his plane that crashed, and the helicopter that hunted me in the Everglades was the piloted by the same black-clad man who had frightened John at the airport before we left.

Roy: Yes. Someone kept trying to kill me. I didn't know who, or why, and you left me very few clues. I sure didn't know anything much about John's life in Miami, just that he played piano at a swank nightclub in South Beach. I met several people who were willing to help, but some of them acted very suspiciously—seeming to know more than they were telling. All I wanted was to help the authorities find out who had presumably killed John and get back to playing golf, but you wouldn't let me.

Keith: Who were the most interesting people you met along the way?

Roy: Well, the two young women were certainly beautiful. Crystal, the raven-haired marine biologist who helped me escape the swamp was a bit of a mystery. She was willing to do anything to help me escape, but once we were out of the swamp, she seemed happy to be rid of me. It was obvious she regarded me as a spoiled golfer. Marianne, John's finance' was a big surprise. I didn't know John was engaged, but he'd sure picked well. She had long blond hair and was rich. Her father was the overprotective type and one of the people I didn't much trust. Both of the women had those hypnotic green eyes that I can't resist.

Keith: How do you like the way it all turned out?

Roy: Don't ruin it for the readers, Keith. You certainly kept me in suspense the entire book, let your readers enjoy the same feeling. Since you had me tell the story, they'll experience it the same way I did. It was scary, frustrating, and I was certainly ill-prepared for the threats you presented me. And since you gave scant clues along the way, I had to stumble on my own through a lot of new people and new situations. On top of that, things in my golfing life weren't going very well either. I'm sure I owe you a lot for making me the star of your story, but if it's all the same to you, let me rest for a while before you put me through all that again.

Keith: Don't worry, Roy. You may show again eventually, but in my next two books the stars are a caddy and a journalist, respectively. I do want to thank you for being such a good protagonist Roy. You did a great job.