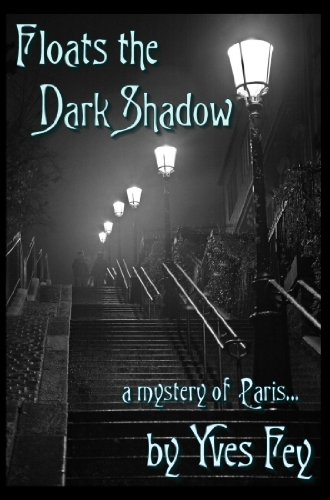 about this book: FLOATS THE DARK SHADOW is the first in a series of dark and decadent mysteries set in Belle Époque Paris. The novels will investigate the madness of murder, and weave crimes of passion and crimes of politics with an exploration of the vivid literary and artistic worlds of the era, and delve into the hidden occult societies.

I discovered the cover for my mystery roaming the internet. Although I'm an artist, I have no skill at creating architectural elements. Michel Colson's evocative photograph was almost exactly what I'd imagined – stairs in Montmartre at night, lurking figures, a touch of sinister fog. I hunted elsewhere, fearing the photo would cost too much, but I finally made an offer that was accepted and I had my perfect cover. The title lettering is an Art Nouveau font of the period. If I had time, I'd love to do an illustrated version one day….

FLOATS THE DARK SHADOW won a Silver IPPY, was a Finalist in both Mystery and History in the Next Generation Indie Awards, and a Finalist in Foreword Book of the Year Awards.

Part mystery, part grand guignol, part travelogue, part theosophical debate of good vs. evil, part love story, it opens with a shocker and slows down only occasionally to let the reader catch his breath. — Review from Travelhound

The book's multisensory richness is more than matched by emotional energy and complexity rarely found in characters outside the classics .— Review from Annie of Ojai

• "Fey's writing is gorgeous: she evokes the sights and smells of Paris and poetically presents the darkness and horror that plague tormented souls." — Historical Novel Society