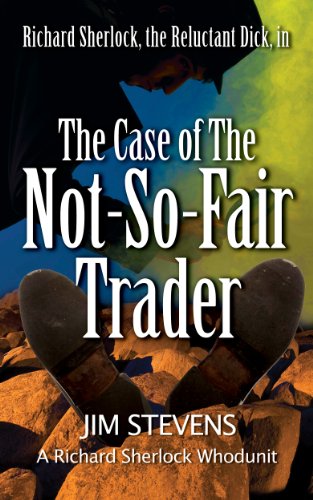 Book: Reluctant Dick The Case of the Not-So-Fair Trader by Jim Stevens

about this book: Why is insurance investigator Richard Sherlock a reluctant dick? Because he'd much rather be on the lanes bowling than trying to figure out how a despicable stock trader got buried under a pile of his own rock garden rocks. Richard already has enough to worry about with two kids to parent, a bad back, and an ex-wife who wants more money.

Not much makes sense in this case. The Who, What, When, Where and How change faster than his pampered protégé Tiffany Richmond changes designer outfits. The case twists more than a can of worms. There's a hit man with a conscience, a financial genius who eats too much cheese, an ex-wife who's constantly having work done, and a family who puts real fun in being dysfunctional.

Richard Sherlock may be a reluctant dick, but he's better finding the who in whodunit than anyone else.

• "You won't want to put it down."
• "Loved the Not-So-Fair Trader, and can't wait for the next installment."
• "Tiffany sounds yummy."
• "Reluctant Dick is a great read."
• "Loved every word of it. Move over Carl Hiassen."