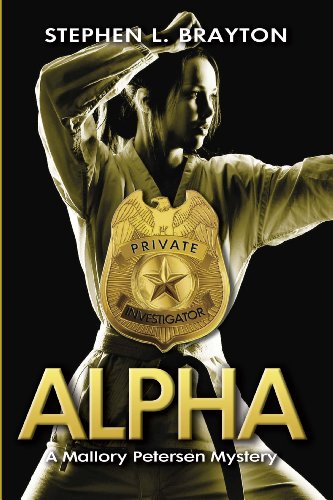 about this book: The second book in the Mallory Petersen martial arts mystery series. Mallory is a Fourth Degree Black Belt and private investigator in Des Moines. This time, she's enjoying a weekend snowed in with her boyfriend. She's worried about getting into deep with him because of her last relationship. She relates the tale of her finding her previous boyfriend, Bobby Furillo, shot outside her office two months previous. Inserting herself into the investigation despite police protests, she discovers devastating secrets about Bobby, including the fact he has a wife and child. Soon, she uncovers a narcotics distribution, tangles with bad cops and gangs.

This was supposed to have been the first story with Mallory, but after completing the first draft, I realized I had a lot to learn about writing. Soon, the plot for Beta started bugging me. After Beta was accepted for publication, I resurrected Alpha, threw away a lot of irrelevant material, kept the main premise, added some new characters, and set the book up as a Now and Then. Now is in present tense with her current boyfriend in December. Then takes the story back to October.

As with Beta, I use actual locations, changing the names when necessary. The research for this book was fun because I inadvertently trespassed onto railroad property because I wanted to use the rail yards for one of the scenes. I also was surprised when I visited the Val Air ballroom and that surprise caused me to change the chapter to something so much better than my original plan.

Once again, serious situations are tempered by humor.

This book is available in both paperback and eBook.