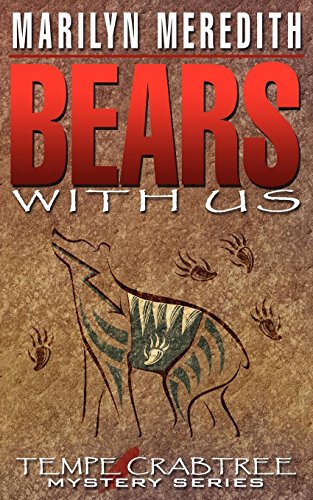 Book: Bears with Us by Marilyn Meredith

about this book: BEAR WITH US, another Deputy Tempe Crabtree mystery, is about bears invading the mountain community of Bear Creek. It is also about a women with a form of Alzheimer's, Sundowners, and the complications it causes--bringing up a sin of the past.

I've read quite a bit about various forms of Alzheimer's, including Sundowners. Researched what family members had to say about caring for a parent with this.

One of the inspirations for this book was hearing about the bears my grandson (a police officer in Aspen CO) chased out of people's houses. I asked him lots of questions. And yes, we've had Bear visitations in the foothill community where I live too.

Deputy Tempe Crabtree faces other problems too, a young person's suicide, a hitman after a family, and the nasty face of prejudice.

As for the cover, the artist with my publisher, Mundania Press, does a great job coming with covers that truly match the series.

• Marilyn Meredith's latest Deputy Tempe Crabtree offering, "Bears With Us," is full of the well-crafted twists and turns we've come to expect from her. It also has a lot of bear action, as we might expect from the title. — Victoria Heckman

• A very entertaining way to learn bear habits and understand what it is like to work in a small community as a Deputy. When a hitman attempts to harm a local resident, it is even more dangerous than trying to scare away a big bear. — Patricia Reed on GoodReads