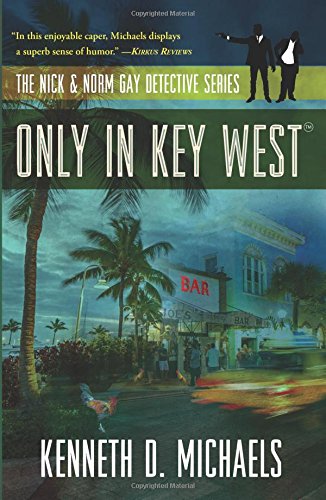 about this book: Only in Key West involves two detectives, Nick and Norm, who come to Key West for some R & R after solving a grisly murder case in Chicago. While viewing a New Year's Eve celebration, they witness a nearly fatal accident of a well-known entertainer. As the evening progresses, the situation becomes even more complicated in that the entertainer never makes it to the ER and the chief of police realizes she may have been kidnapped.

The chief asks Nick and Norm to help him solve the case, adding that there have been a number of suicides, possible murders. Nick and Norm agree to help only to uncover crime and corruption in paradise. As the plot unfolds, Norm's daughter and grandkids come to visit, Nick's mother shows up unexpectedly, and Dr. Jojo, an ME from Chicago, flies in see a novelty stripper, named Merlot.

With the cast complete, relationships develop that bring their own set of problems, which test Nick and Norm's friendship.

Nick and Norm come face-to-face with the killer as this story races to a heart-pounding finale.

Although this book may strongly appeal to an LGBT audience, it covers such universal issues as friendship, loyalty, and commitment. It also deals with grief, loss, PTSD, and drug addiction within the mystery framework.

I came up with the title because whenever we locals think we've seen it all, someone or something will occur, which will cause us to say, "Only in Key West." It seemed like the perfect title for this book that includes some colorful characters such as eccentrics, dwarves, and drag queens.

The motto of Key West is One Human Family and I firmly believe that we can all come together and work out our differences by realizing we are more alike than we are unalike, paraphrasing a well-known quote of Maya Angelou's. This philosophy underlies my first book, The Gay Detective and this one, Only in Key West.