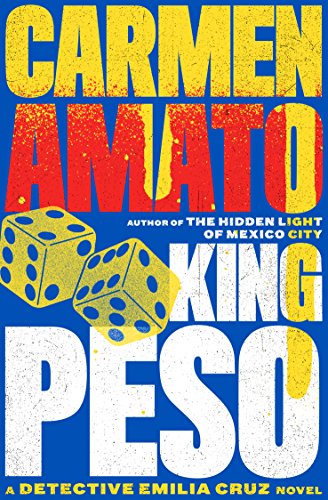 about this book: KING PESO is the fourth book in the Detective Emilia Cruz mystery series recently optioned for both television and film. Emilia is the first female police detective in Acapulco, where Mexican drug cartels battle for control and politicians are bought with blood money.

Originally from New York, I've travelled to many places and began the Detective Emilia Cruz series after living in Mexico for several years. I wanted to show what the drug war was doing to Mexico and especially to showcase the issue of how many people are missing because of the violence. Detective Emilia Cruz is the first female police detective in Acapulco, which means that she lives in a pressure cooker of gender descrimination and violent crime, but in a beautiful place that many readers know. Each book in the series stands on its own, but together form a record of an honest cop making her way on her own terms.

In KING PESO, three cops are murdered, execution style. Emilia worked with them all.

Her partner's wife is killed in a home invasion. Was he the real target?

Is Emilia the next?

She hopes to be assigned to a task force to investigate the killings, but is instead directed to a new police unit championed by Acapulco's ambitious mayor and overseen by a shady union strongman. But when Emilia stumbles upon a falsified report, she will conduct a private investigation, even as another murder victim carries a stark message for her.

Home is no refuge for Emilia; hotel manager Kurt Rucker has a shocking secret that could tear their relationship apart.

Unexpected help comes from a frightened attorney and a famous movie star, but each new clue to the murders unravels the one before. Meanwhile, Emilia's ongoing hunt for a missing girl, a continuing series subplot, leads to the infamous El Pharaoh casino, a place she knows only too well.

What do a casino and a cop killer have in common? Detective Emilia Cruz will bet her life to find out.