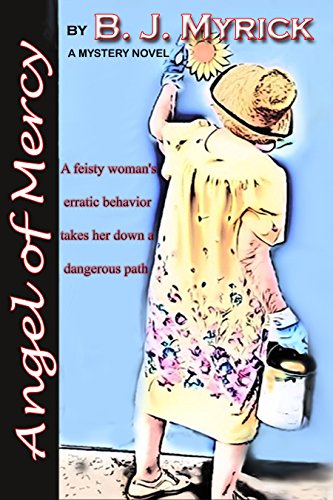 about this book: THE BLUE SCREEN OF DEATH - The novel that rose from the dead

After two years, my mystery novel, Angel of Mercy, was finished and ready for publication. I was giddy with excitement. But . . . only for a moment. The dreaded blue screen appeared; my computer crashed, and my world caved in. I called my daughter, a computer technician in Salt Lake City, Utah, who agreed to suck off the files and put them on a new computer.

I felt somewhat better until my daughter told me several days later that the computer had not arrived. Even though she had recently moved and left a forwarding address at the post office, the postman delivered the package to her old address, and the residents living there denied receiving it. The hard drive containing the manuscript was lost forever.

I sank into a deep depression for three months. My mind refused to accept the fact that my novel would never be published. Then in desperation, my brain lit up, and a light bulb came on. What if all my critique members were as dilatory as I in deleting their sent files? I emailed each of my writer friends, retrieving all the chapters but two. I pieced the files together and retyped the story into my new computer, revising all the chapters again from scratch.

But tragedy struck again. My older sister came to live with me, and care giving chores kept me from finishing the book. For years, I was unable to write. My sister needed twenty-four hour care. Finally, both physically and mentally exhausted, I had to enter her into a rest home.

I began to think the jinxed novel was never meant for publication. But I couldn't give up my dream. Wasn't it a sign that I had been able to recover the lost files? After a time, I began to write again, refusing to give up.

Thirteen years later, 2015 rolled around, and just as I had Angel of Mercy ready once again for publication, my computer stopped working. The screen locked up. My heart was one giant cramp. I prayed, clicked my mouse frantically, tried rebooting. Then I got one little thing to move. I started deleting old files, starting by removing new software that I was sure caused my PC to freeze up. It took over a week before I could work on my computer, but it was so slow that I was unable to upload the file. I wheedled and coaxed my writer friend, Hazel Hart, to upload it. Because of Hazel, readers will now be able to read the finished mystery, Angel of Mercy.

The story is about Emma, a lonely mother whose attention-seeking behavior backfires when Connie, her daughter, threatens to enter Emma into a retirement home. Feeling betrayed, she runs away to California to be with her Cousin Emmett, a resident of Angelic Rest Haven. Her goal is simple; she dreams of sipping fuzzy navels and sharing pizza with Emmett. Her life changes, however, when a note, slipped under her door, threatens: Get out while you can, or you'll be next. Why is someone murdering the residents? Will she be next?

Now I've drawn a deep sigh of relief, asking myself, was it worth the thirteen-year journey? I nodded, leaning back, contented my story was out there, and readers could now buy it in eBook and paperback formats on Amazon.com.