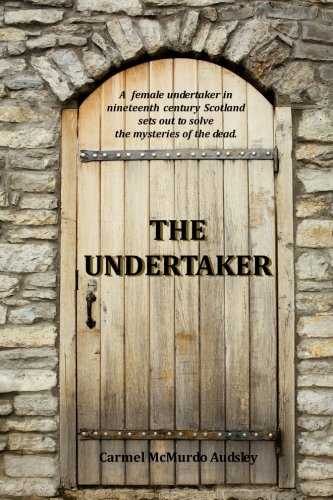 Book Reviews: The Undertaker - A female undertaker in nineteenth century Scotland sets out to solve the mysteries of the dead. by Carmel McMurdo Audsley

about this book: Life for an ambitious and intelligent woman in Edinburgh Scotland in 1858 could be frustrating. Women were not allowed to enter the Edinburgh School of Medicine - although one young woman in 1809 had disguised herself as a man in order that she could study to become a doctor. The Undertaker is the story of 23-year-old Kate Grainger who inherits her father's undertaking business. She wants to become a doctor but, as that is out of her reach, she spends a lot of time with her male friend who is a doctor, poring over his text books to further her education. He is in love with her but she resists his advances, preferring to keep him as a friend. After her father dies, she is preparing her first client for burial when she discovers some suspicious marks on the woman's body. Her curiosity, and her 'gift' of being able to commune with the dead, set her on a path that leads her into Edinburgh's underworld as she uncovers a serial killer who must be stopped before he murders his next victim.

I love a series

I was given a copy of 'The Undertaker' as a Christmas gift and thoroughly enjoyed it. The writer has a way of bringing you into the action and engaging with the characters. I learned a lot about Edinburgh Scotland in the 1850s and also about how undertakers operated. I have ordered the sequel 'The Undertaker:Masquerade' and can't wait to continue the adventures of Kate and her friends. [by Abby Hayman]

Don't let talk of spirits put you off

This book touches on the supernatural, but it should not be judged in just that context. While some people believe in an afterlife and others don't, that shouldn't stop you from reading a novel where the protagonist can speak to the deceased. The main thrust of the story is the lead character's determination to forge on and find a serial killer and to educate herself when higher institutions won't admit women in 1858 in Edinburgh. The story is well written and kept me interested to the end. I am not a believer, but I'm glad I had an open mind and gave this book a chance. I learned a lot about how people lived in the mid-1800s. [by Suzie Williams]

I like stories with strong women as lead characters and this book delivers in that department and more. Kate is more interested in furthering her education and running her business than waiting for Mr Right to come along. Great book for people of all ages. [by Evelyn]

Quite different from the author's other three novels, but just as enjoyable. The writing is good and so is the story development. The characters seem believable and it is great to learn something of Edinburgh in the 1850s. Very worth reading. [by Karina]

Love this book! I got it for Christmas and spent all of Boxing day reading it! I can't thank the author enough to giving me something splendid to read on a rainy day. The story was interesting and the characters became like friends. I have never been to Scotland but I had a real feel for what Edinburgh must have been like in the 1800's. Highly recommend. [by Lisa Compton]

A look behind the door

The cover of this novel made me want to open the door and go behind it and explore. I wasn't disappointed as I found a well-written, interesting story with historically correct facts that added to the authenticity of the story. The chase to find the killer kept me interested and Kate's speech on the witness stand was especially moving. I found out about The Undertaker through a tweet sent via this website, so thanks for keeping readers up to date with the latest books. [by Cheryl Ainsworth]

This book is a great read and kept me interested throughout. There is some humor in there too and I love Kate the undertaker - she is so strong and brave! [by Sarah O'Dwyer]

This book really hoots along and takes the reader along with it. There are plenty of twists to keep you interested and I grew to know and like the characters. I hope the author writes a sequel. This book would be perfect to read on a long-haul flight as you can get engrossed in it and have it finished before you land. [by Gareth Dennison]

This book has enough action to keep all ages interested. It is well written and the story, while taking twists and turns, is easy to follow. I hadn't realised that there were so many medical breakthroughs that happened in Scotland, such as the hypodermic needle and chloroform. I enjoy a book where, not only is it a good story, but I also learn something about history. [by David Taylor]

I really grew to like the character of Kate who was a female undertaker in Edinburgh. She is portrayed as a strong young woman who doesn't rely on a man for financial security and who isn't afraid to stick her neck out to get to the truth. There aren't many role models around for young girls these days but Kate is definitely a get it done kind of woman. There is a really lovely scene in the book where she meets with Grey Friars Bobby who is a little dog that became famous in Edinburgh for sitting by his master's grave for 14 years. She sees the spirit of his master walking down the street. [by Andrea Black]

A story of hope

You could think that a story about an undertaker and someone who talks to the dead could be rather depressing, but I found this book to be just the opposite. It deals with the subject of death in a very respectful way and talking about people being able to speak to the departed was handled in a very interesting way. It is very much the story of a determined young woman who wanted to become a doctor and how she overcame the problem of women not being able to study medicine in 1858. It is also the story of how it easy it was at that time for people to assume another identity. A very well crafted novel that handled the subject matter with integrity. [by Gary Bycroft]

Downloaded it on my kindle and read it in two days. I am very interested in the idea that the spirit carries on after people die and I do believe that there are people who can communicate with the dead. While this book is not a heavy tome about the subject, it does explore the possibility through the character of Kate who has had an imaginary friend since childhood, except the friend wasn't imaginary and was in fact the spirit of a little girl who had died in the Great Fire of Edinburgh. The book is set in 1858, and although witch hunting had died down in Scotland by that time, Kate still had to be careful not to let people know that she was 'different'. The story is well-written and well researched and a very enjoyable read. [by Jerry Hutchinson]

This book is not so much a who-dunnit as a how-and-why-dunnit. The story follows the main character Kate as she sets out to prove herself as a young woman in business in Edinburgh Scotland in 1858. She also wants to find out if a woman who has come to her undertaking business was murdered. Her curiosity leads her on a trail of discovery, not just about the murderer, but also about her psychic gifts which she has had since childhood. Something that you may not expect to find in a murder mystery is a little comedy provided by one of the other main characters James as he tries his best to impress Kate. I thoroughly enjoyed this story and I hope the author will write another crime story, perhaps a follow up to this story. [by Cathy Sorensen]