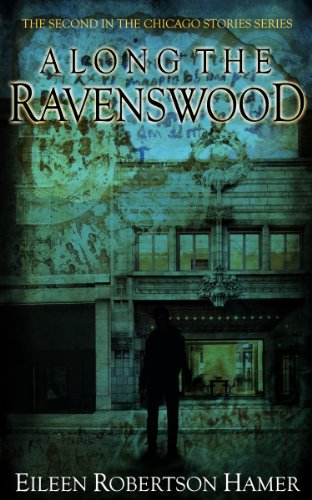 about this book: Along the Ravenswood finds architect Seraphy Pelligrini converting an old church into a library for her one-time friend, Tommy MacKinnoin. When she discovers the old man's body sealed in the font, she's drawn into an investigation that will lead from a WWII Japanese prison camp to the leafy streets of Ravenswood on Chicago's North Side. As she and Tommy draw closer to discovering the killer, they find themselves his target.

I've long loved the work of iconic Chicago architect Louis Sullivan, and his last commission, the Krause Music Store, is on Lincoln Avenue in Ravenswood. since Sullivan's papers were burned and there's no record of his late work, I wonderd if there couldn't be another small building, perhaps a church, hidden under later remodeling . . . and once I had the building, the story appeared.

Titles are hard. I wanted something that set the scene, and Ravenswood itself is named for the railway that slices through the neighborhood from north to south. Tommy lives on the east side, the victim on the west side of the tracks.

Research? I lived in Ravenswood once, and visit there often. For the cover, I spent a day taking pictures of the Krause Music store and the nearby Getty Tomb, both by Louis Sullivan. For the rest, bits of the story and the characters come from people and events of the last twenty years. I just put them in the blender and chopped them up a bit.