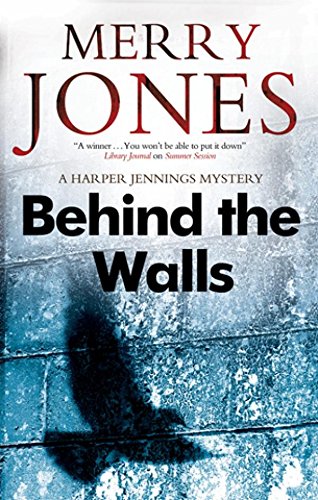 Book: Behind the Walls - A Harper Jennings Mystery by Merry Jones

about this book: It's the second thriller in the Harper Jennings series.

Harper is a female Iraq war vet, now a grad student at Cornell, studying archeology. Zina Salim, Harper's biggest rival in the department, has a plumb assistantship, cataloging a collection of Pre-Columbian relics willed to the university.

One night, Zina shows up at Harper's door in a panic. While at work on the relics, she thinks she's seen a Nahual, a Pre-Columbian shapeshifter. Harper calms her down and, even though she knows such a thing is impossible, she agrees to go to work with Zina the next day.

The next day, when Harper shows up to meet Zina, Zina is dead.

From that moment on, Harper's life gets crazy. Members of her unit in Iraq start showing up and dying. Her husband becomes distant and moody. And, when she's asked to replace Zina and catalogue the relics, she finds eerie goings-on in the walls of the building.

Surely, the relics aren't cursed. There is no Nahual protecting them. Is there?

The readers for this book are people who like thrillers, archeology, lore and mythology, strong women protagonists, lots of suspense.

While writing this book, I did tons of research on Pre-Columbina artifacts, culture and beliefs. But also, I studied honor killings and the cultures that practice them.

For the Harper Jennings series, I learned a lot about Post Traumatic Stress Disorder and the experiences of soldiers who fought in Iraq. In the process, I gained tons of respect for our armed forces.

In most of my mysteries and thrillers, I hope to give readers new information and food for thought beyond the plot itself. Often, I present under-reported crimes (like artifact smuggling and honor killings) and provide new information (like that about Pre-Columbian religion and symbols, or discretionary funds issued in Iraq).

I also try to make my characters struggle with life issues in their relationships or health, so that readers can relate to them as real people.

I like the cover, but the publisher designed it; it was a surprise. I like the title because it implies depth and intrigue. If the walls aren't solid, what can you lean on? What's going on behind them? Nothing is as it seems to be...