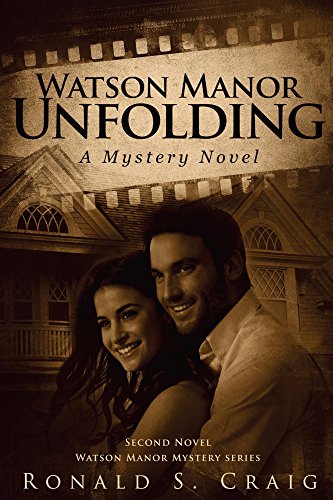 about this book: Watson Manor Unfolding is the second book in the Watson Manor Mystery series.The cover on book two is dramatically different than my first book because I wanted the reader to know that the relationship between Charlie and Jenny Watson is every bit as important as the bed and breakfast, Watson Manor or the crimes they are pulled into solving.

I am a big fan of Hallmark warm and cozy movies and my writing style reflects that class of story telling. Charlie and Jenny share a wit and banter often amusing but not offensive. You will enjoy their courtship and draw into crime investigation while starting their dream of Watson Manor in book one, 'Watson Manor Eventually'.

Watson Manor Unfolding, book two picks up six months later and Watson Manor the B&B is nearing completion when Charlie and Jenny discover a heinous crime they can't walk away from. When their diligence finally exposes the key to shut the vial man's empire down the forced to chose forfeiting their dream of Watson Manor in witness protection to dodge another contract hit or track down the threat slipping beyond the FBI's reach.

Other books by Ronald S. Craig