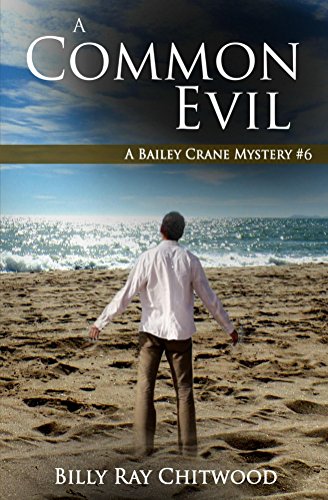 about this book: "A Common Evil" is a work of fiction but inspired by some truth! It is the sixth and final book in the 'Bailey Crane Mystery Series'. It should be noted that each book in the series stands alone.

"A Common Evil" begins with a pre-dawn raid by Federales, FBI, and local police at a lush resort on Mexico's Sea of Cortez. Members of the Mexican Cartel have rented a villa at the resort, among them one of the top leaders of the notorious group. The leader and some of his members are killed in the dramatic shootout...

Bailey Crane is the HOA President at the resort and some believe that he is the core reason for the raid. His friend, the police chief, and his HOA management team have concerns about Bailey's safety... Some time later, Bailey's wife, Wendy, is kidnapped and the non-stop action spins out of control. There are more killings with a mad series of events leading toward a bizarre and thrilling ending.

"A Common Evil" has 5-Star Reviews...here are a couple of comments about the book:

• A Common Evil addresses something basic in all of us--the need to preserve the things we love, whether they are people, a place to live, or a certain way of life. This is the sixth and final book in the Bailey Crane Mystery series, which started with An Arizona Tragedy - A Bailey Crane Mystery (Bailey Crane Mystery Series Book 1), and it more than stands on its own as an engaging story. — 5-Stars by Eden Baylee.

• I read mysteries for the sleuth more than the sleuthing and that's why I enjoyed A Common Evil so much. A fun, suspenseful mystery filled with the musings of a protagonist with plenty of regrets, A Common Evil makes for terrific beach reading (that's where I read my copy). — 5-Stars by an Amazon Customer.