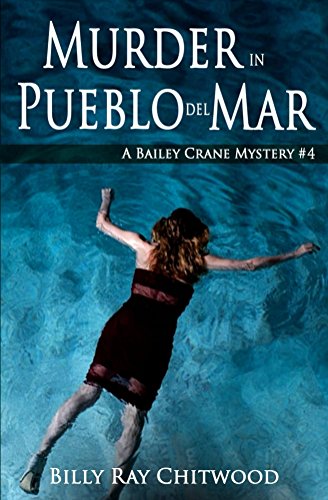 about this book: "Murder in Pueblo del Mar" is the fourth book in the 'Bailey Crane Mystery Series'. Each book in the series stands alone.

An Arizona family goes to Mexico on holiday. Shortly after arrival at their rented villa by the sea the mother is brutally murdered... While fiction, this story is inspired by an actual murder some years ago, with much of the content and details presented from actual Phoenix newspaper accounts at the time. The author's plot has some variance from the real case and allows for Bailey's musing and personal realities...

Bailey has friends in the small seaside town of Pueblo del Mar, and the Police Chief asks Bailey's assistance in solving the case. What follows are some rather bizarre discoveries by our indomitable Sherlock... As he closes in on the killer there are attempts on his life, his friends' lives, and his love's life. The climactic ending is poignant and riveting...

• Recently finished "Murder in Pueblo del Mar" and found it very entertaining! It's one of those "hard to put down" kind of mysteries! Will be looking for more books by Billy Ray Chitwood! (Amazon 5-Stars review by Mary A. Smith)

• I liked the story, and the introspection. The dropping of "I" as the subject in his sentences, while annoying, wasn't enough to reduce the novel to four stars. (Amazon review by Mike D. Landfair)