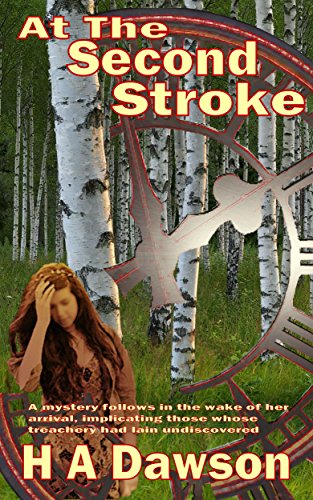 about this book: Huddersfield, Yorkshire, UK : Megan's packed up and broken free from her partner Ben, she's suffered enough blackmail and torment . Nearing her destination this train journey to the small town of Rodley proves to be eventful, during a conversation with another passenger she experiences a succession of disturbing hellucinations, which are so realistic they cause her to faint in the aisle. She came prepared, she'd already has a rented house and settles in planning her future. But the with the best laid plans and firm intentions. Things soon start getting very edgy as Megan is "the spitting image" of Saskia a local young woman who had left this town some 30 years ago, this was particularly irritating for several people. The situation gets dangerous and eventually a team of private detectives become engrossed in this mysterious case. "Enter" an unlikely pair! Luke Adams And Imogen Morrison, who prove to be an interesting personality combination as they prove essential in cracking the mystery and uping the drama and pace.

Luke Adams series:- The plots are character based not procedural in anyway, there are a bucketful of thrills and spills , some gentle humour, each novel in the series has a new protagonist, characters have different backgrounds. Luke and Imogen act as catalyst for the exciting finales, they are a constant factor, part of the whole.

N.B. Currently the series is written in British English, I intend to produce an American version if time allows .

I used to read 50 books a year it has now dropped to 30, my writing activities absorb most of my time, as there are many creative processes to master before a writer becomes a novelist!

It has been an education for me regarding the English language with it's origins, the phrases and use of certain words with many purposes,some often lead to embarrassement, laughter or provocation. British English is very different to American, I am not just refering to the spelling, it's those origins to which I refer, many Latin, French and Germanic (inc Norse) words were vulgarised to mean something totally different an example is "awe" which refers to wonderment or great in ancient scripts however "awful" means dreadful terrible.

Read and enjoy my material, I am scribing my 13th novel at the moment, I plan to release 2 or more this year once they have been through word "crunching", editing and cover design. We can always find time for a modicum of improvement!