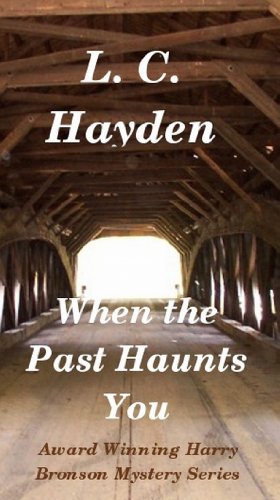 Book: When the Past Haunts You (Harry Bronson Mysteries) by L. C. Hayden

about this book: I wanted to write a book that was more than "just" a mystery. I wanted a book that touched hearts, brought a smile to the readers' faces, and a tear to their eye. Thus, the end result is my newest mystery release, WHEN THE PAST HAUNTS YOU.

Reviewers have hailed it as one of 2012 best reads.

The premise of this book focuses on my serial character, Harry Bronson. For the first time in his life, Bronson reveals that he has a sister (which was a real shock to me. He, whom I created, never told me about this secret!) They haven't spoken in years, but suddenly Bronson starts to receive urgent calls for help from his estranged sister. With the prompting of his wife, he finally makes contact and is drawn into a frightening maelstrom of corruption and murder.

He flies to Pennsylvania to meet his sister. The closer he gets to their destination, the more excited he becomes. When he sees her, they ran toward each other. A shot rings out and Lorraine dies in his arms but not before saying, "Don't leave me." That haunting refrain weaves through the book, echoing our deepest longings for connection, for family, and for correcting past mistakes.

What follows is a hair-raising journey, in which Bronson and closest friends are endangered. The twisty, winding road leads through some of the seamier aspects of society, as well as encounters with the super rich. The path Bronson follows is full of sharp turns and rocky terrain, a path the reader is guaranteed to love.

WHEN THE PAST HAUNTS YOU is part of the award-winning Harry Bronson series. The books have been finalist for the Agatha Award for Best Novel(WHY CASEY HAD TO DIE) the Left Coast Crime Award for Best Regional Book (WHAT OTHERS KNOW) and others.