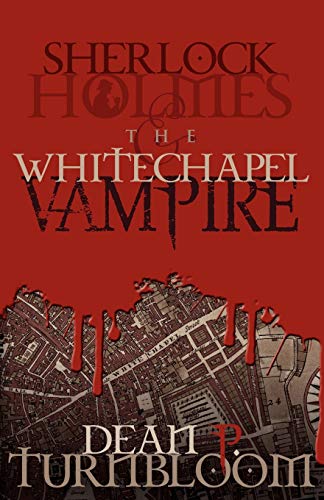 Book: Sherlock Holmes and The Whitechapel Vampire by Dean Turnbloom

about this book: Although the title purports the book to be another Sherlock Holmes pastiche, this is actually a book about a man who, through no fault of his own, became a vampire some six centuries before the time portrayed in the book. It's now 1888 and the weary vampire yearns to be free of an existence in which he feels trapped. He travels to London where he enlists the aid of an American doctor to find a cure. While in London, he attempts to keep a low profile regarding his hunger for blood by choosing his victims from among the poorest neighborhoods. Unfortunately, the grisly nature of his attacks leads the press inton dubbing him "Jack the Ripper". Scotland Yard's Inspector Abberline then teams up with Sherlock Holmes and Dr. Watson to track down the Ripper. There is also an element of romance as the vampire, who pines for a former lost love, finds in the niece of the Police Commissioner that same spark he once felt.

Having made the disclaimer in the first sentence, no doubt Holmes enthusiasts as well as those interested in the Ripper murders will find much to like in this book as it was meticulously researched from both the Holmesian and Ripperologist aspects and remains true to both.